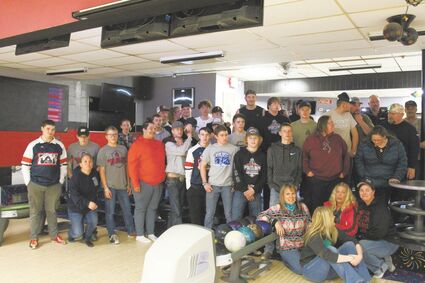 Above: The Burns/Pine Bluffs Wrestling team celebrate with coaches and family members at their award party at Pine Bowl.

On Thursday, March 10, the Burns/Pine Bluffs wrestling team had their end of season celebration and awards party. The event was held at Pine Bowl and from all appearances looked to be a large success. Coach Clayson greeted all wrestlers and handed out awards and announced state and regional placings for those that qualified 34 wrestlers competed during the season and 26 attended this evenings festivities. Of the 34 wrestlers the team had 22 wrestlers go to regionals and 14 qualify for state. Of the 22 wrestlers sent to regionals five of them received honorable mention or above. Of the 14 t...