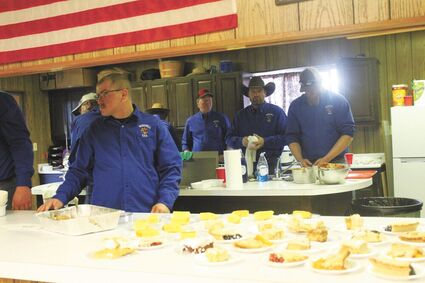 Above: Bushnell Volunteer Fire Dept. members serve up soup, and dessert. Robert Early stands at the counter to assist supporters for the fundraiser. Behind Early is: Keith Wasielewski (red hat), Kenny Whitney and Garrett Purdy helping out in the kitchen.

The heat that was coming from the Bushnell Fire Department fire station wasn't due to a fire, but caused by the tasty soups permeating the air on March 12, 2022 from 4 p.m. through 7 p.m.

The Bushnell fire department has been serving soup since the 1950's. It's a nice way to get folks out of the house for a good meal and some great camaraderie.

This year the firefighters served four different kinds of soups. The choices were oyster soup, ham and bean, and two different kinds of chili, one mild and one hot. Then there was a choice of pie, cinnamon roll, or corn bread. Everythin...