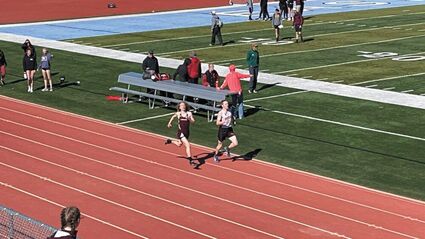 Above: Burns High School runner - Jaspur Nusbaum, 11th grade. on the right of student from Laramie.

The Burns Broncs Boys track and field team competed in the Okie Blanchard Invite track and field competition Friday, April 8. It was a typical Wyoming day with high winds and cool temperatures. Despite the blustery weather the team placed 6th overall at the meet.