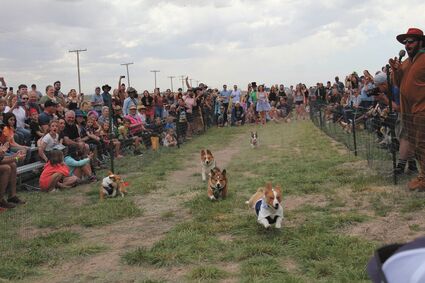 Above left: Leading the pack to take second place is 'Fletcher'.

Fun hats and fancy outfits along with happy-go-luck fun loving dogs were at the Fourth Annual Corgi Derby races on May 7th at Pine Bluffs Distilling in Pine Bluffs, Wyoming.

Pine Bluff Distilling hosts the event with the Cheyenne Animal Shelter to raise money to help the animals in Laramie County. There were over 400 people who attended the races this year.

This event started with an idea to race Corgi's like the horses at the Kentucky Derby. Next on the agenda was to find a charity that Pine Bluffs Distilling wanted to support. That charity just happened to be the Cheyenne Animal Shelter who also helps set the event up every year.

There were 45 Corgi's and 5 mutts that raced on this fine day. Everyone gets excited, from the dogs owner's to the spectators, and of course the dogs themselves. They have different flights of dogs racing to save on confusion. The finals consist of the two fastest pups on the track. Each owner has their own method to get the dogs down the track which another person is always waiting. Some owners use balls, toys, or tricks. Most of the dogs are just thrilled to see their owners.

At 2 p.m. the dogs arrive to be introduced to everyone. At 3 p.m. the races begin. Within 30 minutes all the races are done. It's so fast and exciting to run all the dogs. Not only were the races going on but there was tasty food to be had from two delicious food trucks. Graffiti Cuisine was serving Kentucky Derby food which they ran out of by the end of the races. Then there was Rosita's Trokita. They served up tacos and other delicious Mexican food. There was also Rugged Grace Photography & Artizen Printing. Anyone could get a photo with their dog or with anyone of their choosing. However, for this day, get that fur baby in the picture!

At the end of the Corgi Races, Pine Bluffs Distilling had a big screen tv to watch the Kentucky Derby race to finish out the day.

Britney Tennant, CEO of Cheyenne Animal Shelter said, "This is my first official year as the CEO at the Cheyenne Animal Shelter and attending the Corgi Derby. We understand that people are participating to help with homeless animals all across the county, so we at the Cheyenne Animal Shelter can serve. We are the only open admission shelter that serves the entire county which includes all of the animals. Last month they had a hoarding case south of Cheyenne that was brought in. We have been able to clear almost all of those animals out. They are on to new lives and hopefully a much better situation. This is because of the support of the community. We have a new team of people and a whole new vision for the future for the organization."

The winner of the Corgi Derby receives bragging rights and a trophy plaque. This year the winner was Brook Miller, Amy Miller and Mike Miller with their corgi named Zephan. The contest winner for best hat went to Kim Prince-Carlson who wore the mint julep hat for the second year in a row.

Each year the goal is to raise more money than the prior year. Last year $3900 was raised. This year Pine Bluffs Distilling and the Cheyenne Animal Shelter raised $5652. What an awesome turn out. The organizers are already talking about improvements for the track and the ability to have more people out to the races. The reward was for everyone and they are looking forward to next year. Chad Brown stated, "I would like to thank all the locals for their support and for helping raise money for the Cheyenne Animal Shelter. I am looking forward to next year."