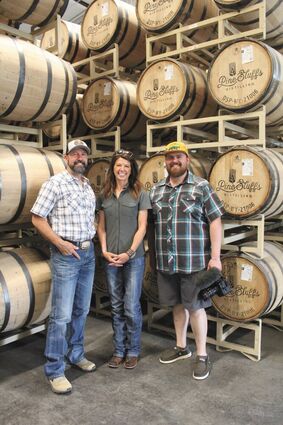 Above: Rick Krueter, Julie Krueter and cameraman - Mike Stephan from the television program called 'Beyond the Hunt.

An outdoor T.V. show director and producer come to Pine Bluffs looking for something to have at their camp fire.

Rick Kreuter from Beyond the Hunt came to Pine Bluffs Distilling to have a bottle of Rye bottled to have for their camp fires.

Kreuter and his wife Julie produce and direct Beyond the Hunt. Julie is from the sandhills of Nebraska north of Big Springs. Her family owns a ranch in the area. She grew up with ranching, riding horses and hunting with her family. Rick is from the Black Hills of Wyoming at Sundance. So hunting is a way to put food on the table.

They both went to school for physical therapy and got a job in Cheyenne Wyoming at the same business. Rick became more interested in outfitting. He then got his license for professional outfitters. He had always loved hunting since a young age. He went out and started RK outfitters.

Their goal is to keep the camps small, hunt hard and focus on the experience. Kreuter's focus is on the animals they love to eat and the big game hunts. Their region is in a four to five state area. They hunt a lot of elk, deer, antelope, and turkeys. Kreuter said, "We just try to put people in our back pockets and take them on the adventure with us. We want them to kind of see and feel the experience, all the things that we do in the process of the adventure. But also to fill our freezers and gives us the ability to know where our food comes from. Once the freezers are full we then share with others. Getting the wild game is a family event." At the beginning it was unexpected. They first ran from it. Kreuter saw the value in sharing the experience outside of the family with folks that have not hunted in the past. Kreuter said, "First is knowing there's an adventure to being outside and being active and to know where your from."

This was why Rick Kreuter was drawn to Pine Bluffs Distilling. The whole concept of farm to flask. Connecting with the local people and the folks here that grow it is no different than connecting with the land and the animals that live there. They feel it was their responsibility to do the show and they are happy to carry the torch.

Kreuter brought a bottle to Pine Bluffs Distilling from Sidney, Nebraska. He said gifts are always a good way to connect with the landowners. The landowners give permission to hunt. Kreuter said, "This is a way to give back. One, it was a good conversation piece; two it was a great icebreaker and three it was something personal for him. This gives a thanks to them for letting us play on their land."

It was Chad Brown reaching out to Rick Kreuter to pick a barrel to do something in honor of hunting, the land and the landowners. It was the perfect combination. They picked from eight barrels to find the perfect bottle for Kreuter.

This will be at the Beyond the Hunt camp. They will be sharing it at the camp. This will be season 16 which starts in July. They embrace the tradition and a message that has been in hunting camps across the world.

On Friday June 10th Rick Kreuter, Julie Kreuter and Mike Stephan, cameraman came into the town of Pine Bluffs. They first got the thrill of watching the Laramie County Shooting Sport 4-H kids shoot. This is dear to their hearts. They thought it was great to see the kids learning how to put food on the table and have the therapy to enjoy the shoot. Later they went to Pine Bluffs Distilling to meet the people and sign bottles.