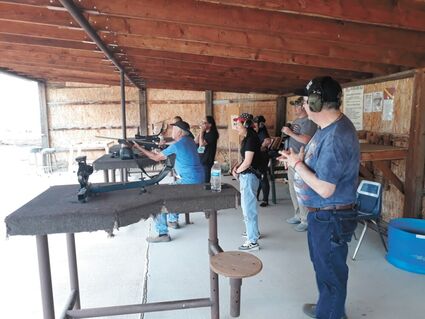 Above: Members of the Pine Bluffs Sportsman Club sight in their rifles and shot a few rounds after the annual meeting held on the Fourth of July.

The fireworks were not the only boom in the Pine Bluffs area. The Annual Pine Bluffs Sportsman Club meeting was held on the Fourth of July.

There were over thirty people that attended the meeting. The meeting was started by President Tom Xiao with the pledge of allegiance. At this time President Xiao asked if there were and new members and then had them introduce themselves. Xiao thanked Penny Merryfield for having created a check list(agenda) for him to follow. He announced that the first Thursday of every month the meeting is held at 7 p.m. At the end of the meeting there are lists for th...