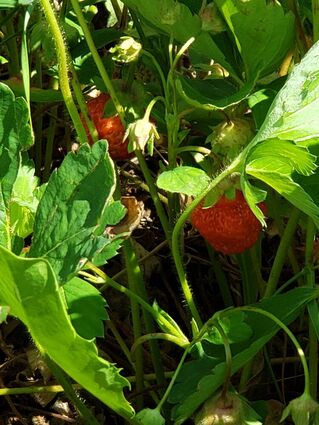 Strawberries not only freshen the air but they taste good, too....

Have you ever wondered why you can walk into some homes and they just smell fresh? Not heavy with scents, but just fresh? If you look around you will most likely find several plants around the house. Not necessarily flowering plants, although they are the most fragrant, but a wide variety of plants. Fragrances can overpower odors but respiration will remove odors.

Some people will be skeptical. Can plants really purify the air in our homes? That's a good question. Some researchers, such as scientists at NASA, say, "Yes": Other notable researchers, such as Lauren Johnson at CNN, will say, "No". Of course I'm being a bit facetious here. Lauren Johnson is not a researcher, but in typical CNN fashion seems to believe that anything she says is the absolute statement of fact and her brand of "science" debunks everyone else. The fact is that the question is still up for debate. The science is not clear because the studies haven't been showing consistent results. Some of the studies that declare NASA's study as faulty have failed to include the last conclusion of the study that states that the microbes in the soil have at least as much to do with air purification as the plant itself. Since the NASA scientists have been working on ways to purify the air on the space station, I would lean more toward their conclusions. Lives depend on their results. People like Lauren Johnson are just interested in making a buck.

But whether or not plants purify the air is really a moot point. With adequate ventilation and filtration the air will be purified to an acceptable level with or without plants. The most important finding from the research is that some plants actually are exceptional air fresheners. An air freshener being something that makes the odor of the air more pleasing and acceptable regardless of how it works. There are plenty of chemical products available in the stores that release oils into the air which will overpower the unpleasant odors. I know, unpleasant odors are "in the nose" of the smeller. I think of the commercial of the teenage boys being "nose blind" to the implied gym smell of the bedroom. Mom comes in and sprays the air and suddenly everything is fresh again. Fine and dandy but sprays don't last very long. The plug-ins are a little better but they have problems, too. What most people don't realize is that they emit a fine mist, some of which falls to the floor. The oils will damage floor coverings. Hardwood floors are especially susceptible. I remember refinishing a hardwood floor and having a white substance show up at a certain spot once we put the first coat of finish on. We sanded it out and refinished it multiple times thinking we had caused the problem. Finally we pulled the information out of the homeowner that they'd had a plug-in air freshener in that outlet for several years. The oils had soaked into the floor and ruined the wood. They reacted with the finish and created a white spot that couldn't be sanded out.

Plants don't have those problems. Plus they have the benefit of working 24x7x365. Even when the electricity fails. All plants need is water, some fertilizer and sunlight. They provide natural scents that don't necessarily overpower offensive odors, but they can remove the odors while replacing them with more pleasant aromas. Many of these air freshening plants are commonly found in homes and are doing their jobs even if that isn't why they were purchased.

Take the Golden Pothos for example. It is a plant commonly found in hanging baskets. It doesn't flower, but has a very pleasant foliage. It is also the best plants for removing formaldehyde from the air. Some of you just thought back to high school or college biology lab and remembering the smell of formaldehyde from dissection class. Yes, I remember having to open the doors and windows to air the class out because some students were getting sick. We didn't have air conditioning back then. In the home, formaldehyde is used in the manufacture of most of the fabric components of our furnishings: drapes, carpet, upholstery, etc. and in cleaning products, toilet paper, and personal care items. The Golden Pothos plant removes it from the air as a part of its natural respiration process.

Another common plant is the aloe vera cactus. When I was a kid we'd get sent to the aloe vera plant every time we got a burn or scrape. Yet it also removes formaldehyde as well as benzene. The dracaena plant that is so common removes pollutants that are released from oils and varnishes. Just think of everything in your house that has an oil or varnish finish. If you have stained wood furniture or cabinets you have an oil and varnish product. That goes for most of the exposed wood on furniture. The snake plant thrives on low light conditions and makes the perfect plant to put in the bathroom to remove some of these pollutants. Other plants that will help filter out these pollutants are: English Ivy, Chinese Evergreen, Weeping Fig (Ficus), Bamboo Palm, Philodendron, Spider Plant (one of my favorites), Rubber Plant and Boston Fern. That's the non-flowering plants.

So what about some showy plants, those that flower and give us a show while they're cleaning the air. There are a lot of those. Some don't clean the air so much as they release a pleasant aroma that replaces the unpleasant odors. The Rhododendron, Peace Lily, and Chrysanthemum are wonderful examples of flowering plants that both clean the air and leave a fresh aroma behind, all while giving us a beautiful display of flowers. But there are others, too. How about some fruiting plants? Citrus trees can be grown in pots indoors. Not only will you get that wonderful citrus aroma from the blossoms but you can even get some fruit from them. And strawberries. These are very easy to grow indoors and with the right variety you can get fruit periodically throughout the year. Another plant that can be grown indoors is lavender. It takes a little more effort but just imagine that fresh, lavender aroma wafting throughout the house all the time. Another quality of lavender is that it's relaxing. Growing it indoors will open up the stoecha varieties that are unlike the common lavenders. They have gorgeous flowers that look a lot different than common lavender. Mums and daisies pretty much round out the air freshening plants that are commonly found in homes. But that doesn't mean there aren't others. And never discount herbs. Not only do they smell good but you can use them in cooking, too. The best of all worlds.

Almost any plant that can be grown indoors can be either aesthetically pleasing or air freshening. Never discount the value of a plant that is only pretty to look at. Even if they don't freshen the air or even have a beautiful aroma, plants around the house help to relax us and provide a more peaceful and comforting environment. If you have any questions, ask a Master Gardener. It's what we do.