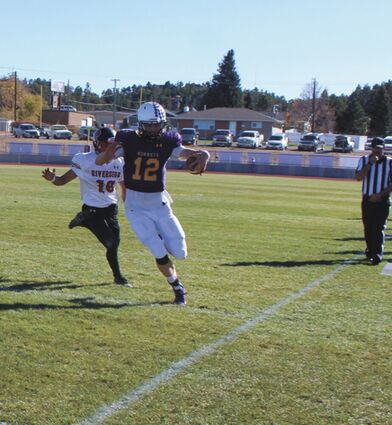 Above: No. 12 Stu Lerwick runs towards the goal.

Stuart Lerwick, the Pine Bluffs Hornets football and basketball stand-out athlete has another title to his credits. Lerwick has been named as the Wyoming News Now Prep Athlete of the Year.

Lerwick who will be a senior in the 2022-23 season is considered as one of the best athletes in Laramie County and the state of Wyoming. Lerwick is a two-time All-State honoree in football and basketball. He led the 1A-9 Man football league in passing yards with 2,215, passing completion with 63.5% and touchdowns with 23. In basketball he set a new school record with 50 points in a single game against Lin...