Jr. Lady Broncs walk away with wins over Lady Doggers and Lady Cyclones 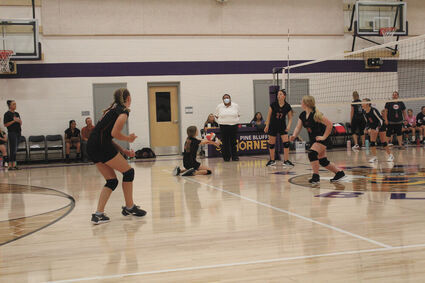 Above Left: Burns Jr. High player No. 4 Tatum Reher goes down to save the ball and bumps it to her teammates - Addison Dishman No. 27.

The volleyball was going back and forth over the net on Friday, September 2nd, which was the start of a month of volleyball games every week. Friday the girls played two teams. Each of the A and B teams took turns with the games getting a rest in between.

The Burns Junior High Volleyball team did the best they could. It is the beginning of the season although the time will go fast.

The A team for Burns did not have a great day. They lost to the Lingle-Ft. Laramie Lady Doggers in two sets. The second team the A team played was the Southeast Lady Cyclones. Again, they lost in two sets.

The B Team on the other hand had an outstanding day. They played the Lingle- Ft. Laramie Lady Doggers first. They won in two sets. The second team the Lady Broncs played was the Southeast Lady Cyclones. They won three of the sets.

The Burns Junior High Lady Broncs are on their way to having a great year.