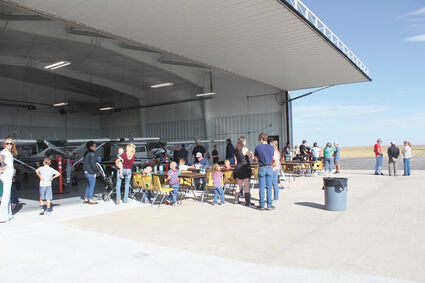 Above: Visitors to the Open House at the Airport enjoy refreshments while checking things out or waiting for their airplane ride.

The skies were buzzing with planes on Saturday. The Town of the Pine Bluffs put on an open house and fly-in event at the John Marquardt airport.

Most people in the area did not realize that Pine Bluffs has an airport. In fact, the airport is considering an Intermediate airport. That means that a pilot can stop, get fuel, and rest at the terminal. The terminal was built about a year ago. This building has a hangar attached to the building. In the building there are drinks, a place to eat and rest, watch the weather and check their flight plans. There is a car available to get into town to get a motel room or something to eat also.

In the hangar is a mechanic that can work on the plane if they are having problems along with a flight instructor. 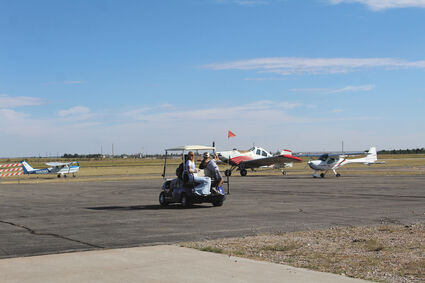 Mayor Justin Fornstrom and Council Member Ally Leitza wandered around greeting visitors while helping with the event. When you first went in you received a number to take a ride in a plane at the event. Different pilots took turns showing the visitors how cool the town of Pine Bluffs is from the air. If you were not in the air there was different areas you could peruse. The town had some old cars to admire. Even the kids had mini cars to show off.

If you were hungry or needed something to drink Curries Cuisine was there to wet the appetite. There were sweet treats and burritos along with water for the event. Some of the local pilots visited with people to share their passion for flying. There were even students from Sidney, NE. who were excited to see the event.

There were over 82 people that flew in the planes on Saturday. That did not include the ones that just wanted to see the airport. Overall there were about 100 visitors that showed up for a successful event.