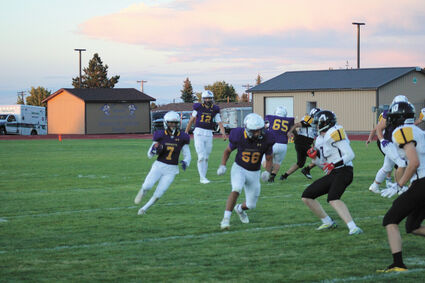 Above: Hornet's No. 7 - Abe Serrano runs with the ball while No. 56 - Jeff Jett Gaspar runs blocking in defense of Serrano against Wright players No. 1 - Briddger Worman and No. 10 - Tucker Edwards tries to get to Serrano.

Pine Bluffs Hornets football team continued their journey to the championship game last Friday by defeating the Wright Panthers in a sound manner 40-18. The Hornets played a sound game combining running and passing plays to keep the defense off balance. In the first half the Hornets running game seemed to be unstoppable chewing up 10 and 15 yard runs at will. The passing game was just as effective with quarterback Stu Lerwick hitting his recievers like #7 Abe Serrano for touchdowns.

The first quarter was pretty even as both team scored touchdown. Lerwick hit Serrano for a seven yard touchd...