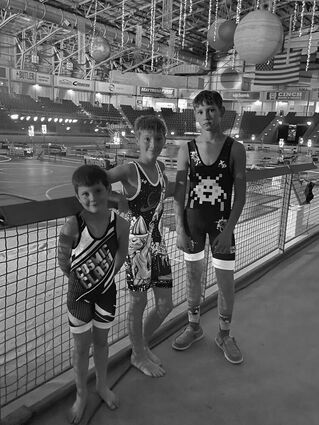 Above: Axyl Ross, Gavyn Muirheid, and Caysen Ross at the RMN Cosmic Clash in Denver, Co.

Three Burns residents are still wrestling in the area. Gavyn Muirheid, Caysen Ross and Axyl Ross all of Burns, Wyoming wrestled in the RMN Cosmic Clash wrestling tournament held in Denver, Colorado on September 24th. RMN Events who promotes the games is one of the worlds largest promoters of these tournaments. The tournament is open to all ages and genders and was a huge success with hundreds of competitors who came to show off their talents. The competition is open to any wrestler from across the country. Wrestlers get the chance to wrestle opponents from all across the United States.