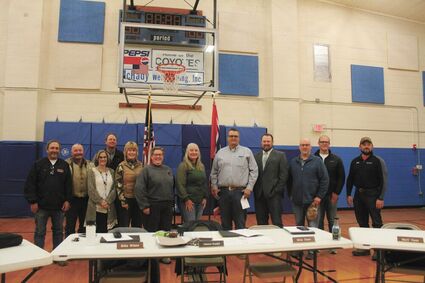 Before the regular meeting of the Laramie County School District No. 2 delved into business, Burns High School Principal Mr. Dishman announced that the Burns varsity volleyball team had won state. There were 12 players, head coach Andrea McKinney, Assistant coach Bailey Ward and manager Mackenzie Stansaas. The girls that are all-conference players are Tehya Gallegos, Sienna Gallegos, Brooke Hansen, and Emma Norris. The 2A all- state Players are Brooke Hansen and Emma Norris. Also 2A southeast volleyball player of the year is Emma Norris.The board of trustees congratulated each one and took a group picture. Board trustee Jeff Kirkbride gave a speech that it has been a pleasure to see the team grow through the year. He said, "They have done hard work and it paid off. I am proud of you."

The meeting continued with the regular agenda. Next was the audit that was done. The report was given by Mr. Paul Stille. He went through the highlighted areas that were different or needed to be brought to the boards attention. Next was the normal warrants and financial reports that Misty Gallegos reported on. She did say the enrollment is up in the District.

Next was new business. Lance West presented at the COW meeting the alternate route for the buses in the snow. Board trustee Matt Haas was concerned about the students being on the bus in the snow. He said, " I had to clean the roads before and they are not good. I feel the school could take a snow day or just have the town kids come to school." Board trustee Heidi Romsa is concerned about the road going by her house since it is the last road cleaned. She would be glad to help the bus, just gave her a call. The board voted with two against and the rest for the routes.

At one time during the meeting the board went into executive meeting.

They came out to go on to hires, transfers and resignations. They approved of the following. The board hired Chelsea Jackson for cook, Jessica Church for Substitute teacher, Tegun Morrison for substitute Paraprofessional and Ashley Hottell, Cathy Gully and Amanda Johnson for Paraprofessional pool. They acknowledged the resignations of Pat Walter, Pine Bluffs Junior High football coach, Fany Lechuga, cook and Beth Hoyt, cook. The board acknowledged the resignation at the end of the 2022- 23 school year of Lucus Lechman the Pine Bluffs High School science teacher. The last they acknowledged the change of status of Les Horst from full time activities bus driver to substitute activities bus driver.

Traci Schneider, Curriculum Director, gave an update on the curriculum.

Amber Morgan, Food Service Director was excited to inform the board that the students and parents are having a Thanksgiving dinner at the school. They took reservations to make sure they would have enough food. Schneider complimented Morgan on the food for the staff. Chairman Randall was thrilled with the food for regional basketball.

There was discussion of the Wyoming School Board Association 2022 Conference. It will be held in Casper on November 16-18th. Mike Olsen is receiving an award of Distinction Level I.

Several of the board of trustees will be attending.

At the end of the meeting the new Board of Trustees were sworn in. For At Large was Cody Nusbaum, Michele Lerwick, and Kendra Roeder. For Area D was Billy Wilson.

Out with the old and in with the new. The night was full of successes throughout the school district with having new board members, awards with board members, and a State winning volleyball team.