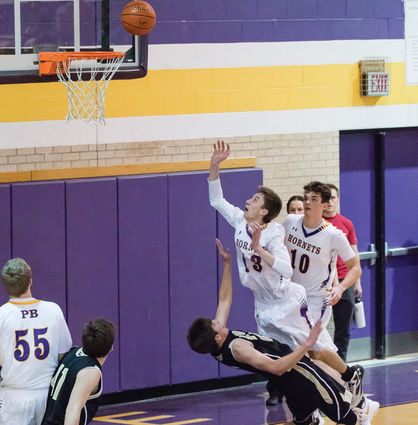 Pine Bluffs' Hesston Fornstrom (13) runs over Wright senior Kane Leithead as he puts up a shot in the semi-finals of the Wyoming 2A East Regional Tournament in Gillette last Friday. The Hornets came away with a 81-47 win over the Panthers and would go on beat Big Horn in the finals for the regional title.

The Pine Bluffs Hornets' quest to repeat as the state 2A champions forged ahead last weekend as the team literally mowed the competition down, leaving little doubt as to why the Hornets were ranked #1 in the 2A East. It was a run that ended with Pine Bluffs taking the title of Wyoming 2A East Regional Champions and a berth in the Wyoming 2A State Tournament starting on Thursday.

The Hornets kicked off their regional tournament run last Thursday, facing off against the Tongue River Eagles.