Lanning is a true Wyoming firebrand 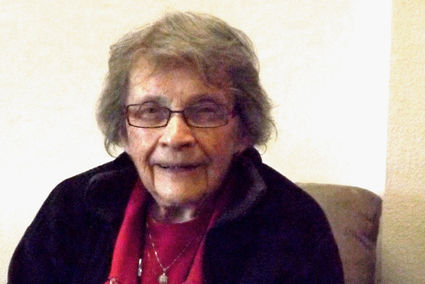 Weighing in at two pounds and 10 to 12 ounces, prospects for baby Lavitra Bodley Lanning's survival, on Bodley's Hill, were tenuous at best.

Lanning recalls her mother telling her she was placed in a box on a table with jars of hot water in all four corners and a light bulb above her head. While not a practice used in modern medicine, her mother's home remedy proved effective. Little Lavitra survived and has done so for 87 years.

"I guess there is reason I'm supposed to be here; to give everybody a bad time," Lanning said.

She punctuated her statement with laugh that is a surprisingly pleasing staccato, goodnatured and without malice.

Bodley's Hill, named for her family, was located in the town of Wahoo, which at that time was 30 miles west of Omaha, Neb.

Her mother's maiden name was Gregg. According to Lanning, her mother's uncle was the creator of the Gregg's shorthand system.

"I took a week of it in high school but I was too dumb to master it," Lanning said.

The family Lanning set out from Wahoo in 1937 with the intention of moving to Oregon. They had some farm land in western Nebraska they wanted to check up on while on their journey. The farm was tenanted by people who had reported the current wheat crop didn't come in and there was no profit.

"They told my dad that they didn't do anything. That the wheat wasn't any good, but when we got out here we found out it had been combined. They didn't tell the truth. So, you know, you have to live with your conscience," Lanning said.

The family never got to Oregon, opting to settle on their land in Nebraska.

She met her husband, Ronald Lanning, in church, when he was at home on furlough. Ronald served during World War II and saw action at Normandy, the second day of the invasion. He never talked about it.

"Our kids would love to have heard about it and the only thing he ever said was that after the war he went into Paris and he couldn't stand to see little kids go hungry," Lanning said.

Her grandson, Jeremy, who had served in Afghanistan was the only one in the family her husband would speak to about his experiences.

The newlyweds took over the Lanning farm when her in-laws retired. In time they purchased the farm.

"We lived in three rooms and a path. A sidewalk to an outside toilet," Lanning said. "That was it. We didn't have a bath. We had a hand pump in the kitchen. We had a phone, party line. Three longs and a short, cause that way you wanna call somebody down the road a little bit. It was altogether a different world."

She recalled with humor how her husband, who loved to farm, had confrontations with one of their cows.

"This one old cow, she was a kicker. He would cuss that cow because she kicked him," Lanning said, and then let out with her laugh.

They survived the blizzard of 1949 on the farm without the benefit of electricity, though they got electricity in June of that year. However, with Mrs. Lanning pregnant, they decided to make the move to town in Pine Bluffs in 1950.

When her daughter, Carey, was in kindergarten, Lanning went to work for the Pine Bluffs Post.

"I worked at the Pine Bluffs Post two or three mornings a week. Before that, back in the forties, I was a reporter out at Lindberg," Lanning said.

Her son Mark saw service in the armed forces during the Korean War. He was attached to the Pentagon.

"When he was in high school, they had so many typewriters and they were going to start the class the next week. Well, they were one typewriter short and Mark was going to be the one without the typewriter. So my husband went to the principal. He was really upset. He said, 'You've got money for sports and everything else. I expect you to have a typewriter by Monday so my son can take typing.' They did and that was his saving grace. That kept him form going to Korea. He was in the Pentagon then," Lanning said.

Her son took over the family farm. He has a green house west of Lindberg where he raises fruits and vegetables. He also raises organic wheat. While he's 66, he has no plan of retiring. He loves to farm as much as her husband did, Lanning stated.

"We have three-quarters in Nebraska, and don't ever buy land in Nebraska, 'cause the taxes will kill you. Then he bought our home place which was 320 acres here in Wyoming and then we've got 5 quarters besides," Lanning said.

The acreage is not contiguous, with some plots 5 miles from others with various plots in between. Asked whether that makes it a little difficult to work, Lanning agrees but sees a bright side as well.

"Sometimes it's a blessing in disguise.Hail may be out here but not on the next one," Lanning said.

Lanning, who is above all else a God-fearing woman, went to work at her church, Crossroads Community as financial secretary. She served in that capacity for 23 years before retiring. She still remains the organist and a stranger may well expect an invitation to join her for church.

Having survived the loss of her husband, Ronald, Lanning suffered another loss recently.

"I had a little dog and I had to have him put down. He had cancer, and I really miss him," Lanning said.

Cooper had been rescued from a puppy mill in Missouri. Lanning was told that Cooper was five years old at the time, though she believes he was a little older. She had Cooper for six. When she took Cooper to the vet to have a couple of teeth pulled, puss poured from the little dogs mouth. When the vet finally diagnosed cancer, Lanning was told she could have Cooper put down.

"I said, 'No, as old as he is I'll just keep him," Lanning said. "On Sunday morning I got up and went to church, he slept with me. I didn't get him up. I got home from church and went and walked. At 2:30 he finally got up. He wouldn't eat or drink a thing. I knew that was it, so I took him in the next morning."

"I miss him. He was my four legged baby! You know?," Lanning cried.

Lanning also laments the town's loss of pine trees due to the hail, in the park and amongst neighbors. She recounts how a neighbor had payed $3,000 to have three pines removed. Lanning herself had one tree that needed removing. The man who took out her neighbors trees quoted her $1,500 to remove her one.

"I thought, kiddo, I wasn't born yesterday and I know I'm a woman and I'm old but I'm not stupid! He's going to come back this spring, but he's not going to get the job," Lanning said, rapping the table in a beat to each word.

A stranger asks her how she managed to survive for all these years.

"I don't know. I guess I'm too ornery," Lanning laughs.

Lanning leaves the stranger with the impression of a woman who would just as soon kick up her heels as spit in the devil's eye. A woman as tough as the Wyoming land she lives on but with the kindness of her faith and a gentle heart.

Just do not cross her.