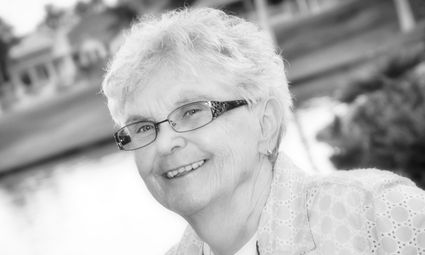 Wauneta Jane ("Barb") Brown, 74, passed away March 20, 2017 at her home in Goodyear, Arizona. A private remembrance service will be held in Goodyear later. Burial will be at the Pine Bluffs cemetery, Pine Bluffs, Wyoming. No graveside services are planned at this time. In lieu of flowers, donations may be made to Hospice of the Valley Phoenix, 1510 E. Flower St., Phoenix, AZ 85014.

Barb was born May 23, 1942, the youngest of six children, to J. Lester and Flossie M. Kitto, née McCune on a rented farm near Fulton, South Dakota. As a young girl, she worked and played outside with the boys, fostering her life-long love of sports. She attended Fulton grade school for the first 3 ½ terms of elementary education, then Hanson County Fairview #1 through the eighth grade. She attended Fulton High School, graduating in 1960. She was preceded in death by her parents and siblings, Arlyne M. White, Helen J. Kurtenbach, Alvin L. ("Bud") Kitto, Bessie L. Charles, Clyde L. Kitto.

After high school, Barb moved to Rapid City, South Dakota to be near her older sisters, Bessie and Arlyne and their families, and to attend business school. In Rapid, she worked various retail sales jobs. After business school, Barb moved to Cheyenne, Wyoming with Arlyne and her family. In Cheyenne, she worked at Western Ranchman Outfitters outfitting real and drugstore cowboys for the prestigious Cheyenne Frontier Days rodeo. In her spare time, she played softball and served on the Wyoming executive board of American Softball Association ("ASA") and pitched on the Wyoming ASA Championship team in 1975.

Barb married Charles R. ("Bob") Brown on September 18, 1976 in Rapid City, South Dakota and the couple settled in Oshkosh, Nebraska, where Bob helped run his family's John Deere business. The couple had two daughters, Leigh K. Freeman and Jackie J. Quella. After the girls were in school, Barb helped out at the store with bookkeeping.

After closing the John Deere store in 1988, the Browns moved their family to Cheyenne where Bob accepted a civilian position at F. E. Warren Air Force Base and Barb returned to work at a western wear store. In 1990 the family again transferred to Littleton, Colorado where Barb obtained a position at an electronic archival company. In 1998 the couple moved to Great Kings Hill, Buckinghamshire, England where Bob accepted appointment as a Department of Defense Contracting Officer, and Barb worked in telecommunications. While stationed there the two traveled around the U.K. and Europe, with the girls joining on breaks from college.

Then in 2002, the couple returned to the Denver area, settling in Aurora, where Barb could attend Colorado Rockies' games, including game four of the 2007 World Series. After retirement, the couple relocated to Goodyear, Arizona in 2014.