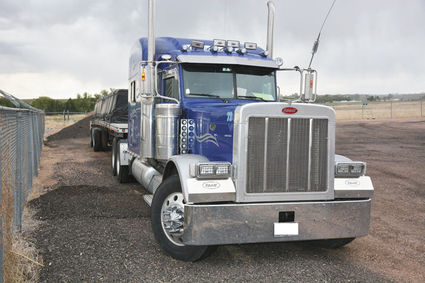 The Weld County Sheriff's Office is asking for information regarding a deceased man, Nathan Combs, 49, of Burns, found near this Blue 2007 Peterbilt 379 at Weld County Road 136 and Weld County Road 77 west of Hereford on May 18, 2017. This is an active investigation into a possible homicide.

Officers were dispatched to the scene at 3:20 p.m. on that date and according to information disseminated by the WCSO, the initial examination at the scene suggested that Combs was performing maintenance on the truck when the vehicle unexpectedly moved and that Combs was possibly run over by it. Combs was pronounced dead at the scene.

Upon further investigation Sheriff's Deputies determined that Combs had not been run over by his vehicle but had, in fact, suffered an apparent gun shot wound and evidence at the scene indicated that this wound was not self-inflicted.

As the investigation into Combs' death is ongoing, the WCSO have not released any further details of the crime. They are calling on the community for any information, including those that may have noticed his vehicle at the scene that might help bring justice to the Combs family and are asking that anyone who might have any information to contact them at 970-356-4015 or the Northern Colorado Crime Stoppers at 1-800-222-8477 or 1-800-444-3776.