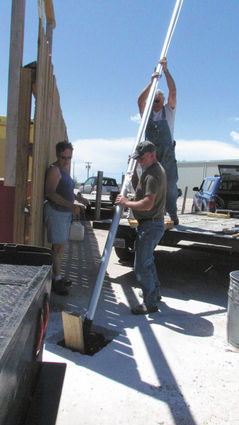 Chuck Radcliffe (center) gets a hand erecting a flagpole from Diane Wise (left) and her husband John (right).

"Rally around the flagpoles boys" stands true to this day as members of the Donald Eisenhauer American Legion Post 60 have been erecting flagpoles in Pine Bluffs.

This is actually a American Legion Post 60 project and the flagpoles are made by John Wise and Chuck Radcliffe. Wise was the originator of the idea, and Radcliffe helped him achieve it.

This has been a project that reached beyond Pine Bluffs. The flagpoles were donated by Evertson's Operating Company in Kimball, Nebraska....