One down, eight to go 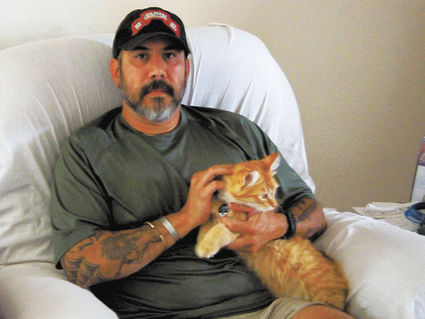 Being a cat, Jdam, in the lap of Kevin Borquez, is exhibiting his reluctance to cooperate with an idea that is not of his choosing. Jdam, who recently suffered a 13-day ordeal locked in the basement of a neighbor is getting accustomed to his new life after loosing one of his nine.

With nine lives at their disposal, perhaps felines can afford the luxury of curiosity.

That knowledge was likely of little solace to Jdam the cat during his recent 13-day ordeal in the last half May.

Jdam is the therapy cat of Kevin Borquez who suffers from PTSD. He is a feral cat who is the progeny of one of the tom cats who search the area around Third and Beech, especially the property of Edna Hickman, for felines in heat.

On a day in June of last year, Borquez was in the laundry room of the Cheyenne Public Housing complex, where he lives, He stated that he heard meowing. When he looked...