These goats aren't kiddin' around 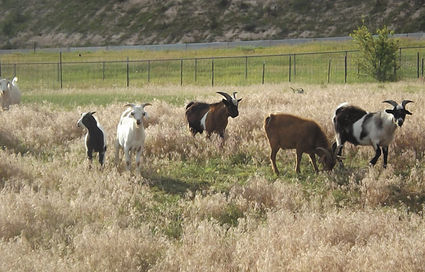 These are just six of Trent Werner's goats. They are in one of the fields of the Werners that lie across the alley from their home. The goats are at work keeping the weeds and the grass cropped on the property.

Smores, the goat, was perhaps thinking that the greener grass on the other side of the fence would be more to his liking. Smores is one of 24 goats owned by Trent Werner, 20, son of Mr. and Mrs. Roy Werner of Pine Bluffs.

Werner initially got a deal on a few goats. The intention was to employ the goats as a weed and grass removal operation on the Werner property across the alley from their home. After a time, a few goats turned in to 24 on the property, all belonging to Trent.

"They're all his, but we have fun with 'em," said Roy Werner, father of Trent.

The fence surrounding the property, as evidenced by Smores, has been in need of goat-proofing, an on going process for the Werners. They stated that some of the younger goats have, from time to time, found breaks in the fence and wander a bit in the area. However, according to Roy Werner, they do not wander far from their home and always return.

Jo Radcliffe, who lives a few homes away from the Werners, likes to come out with baby carrots to feed one of the goats who likes them.

If anyone would like to feed the goats, they might think of bringing Cheetos Cheese Puffs, a particular favorite of one of the animals.