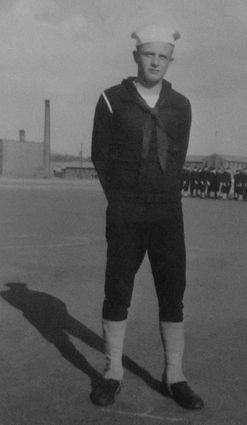 Enlisting with some high school buddies, Delbert and Dwight

Eisenhauer, in January 1943 to the Marines, Richard Gardner experienced a let down due to size and weight.

The Marines rejection was taken hard, but then Gardner enlisted in the Navy and was accepted in a special program USNI, due to his eye sight. His disappointment faded.

Gardner graduated from Pine Bluffs High School, and headed to Denver, then to the Great Lakes for more training, as a mechanic in the Air Corp. Finally landing in Miami, Florida.

During his time as a mechanic, he felt unchallenged. "I became bored to death with my job." stated Gardner. He started seeking different jobs he could transfer to in the Navy with more challenge.

Gardner was informed of a "pilot program" training pilots. He applied to and was accepted to the new progran to train pilots in landing on aircraft carriers. He found himself in Pensicola, Florida training pilots on the U.S.S. Guadalcanal.

Pilots learned to take off and land on carriers from Gardner and the others division trainers aboard the carrier.

Upon his discharge from the Navy, Gardner returned home to Pine Bluffs and the family farm.

From veteran to farmer was an easy adjustment for Gardner. It was what he knew, and was handed down from generation to generation.

Gardner, now 92 years of age, is slowly settling down and is in the process of retiring from the farm. "We sold the cattle a couple of years ago, and now we are just waiting to hear on the farm." said Gardner. "The farms been in the family since the late 1880s, and its time!"

Farming led him to other achievements, as he did in the military.

He was on the board for and served for 18 years in the Southeastern Laramie County Conservation District, active with 4-H and was an avid bowler for many years in Pine Bluffs.

This Veteran stands tall, like his crops and cattle. We thank him for his service in the Navy.