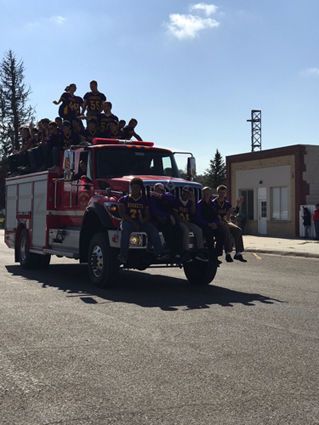 Members of the Pine Bluffs Hornets football team ride on one of the Town of Pine Bluffs fire truck.

Several items were on the agenda to be reviewed and approved at the Pine Bluffs town council meeting for Oct. 16.

Reviewed and approved were invoicing for Lidstone & Associate for the North Well Field Project in the amount of $4, 649.66 and Water Storage Tank Replacement for $24,178.24.

New business discussed were Todd Bishop, Keiser Wealth Management, presented financial plan for the 6th Penny Project Bonding. Much like in the past discuss was on the possibility to borrow the proposed amount in part of the tax dollars collected to get a start on Proposition 5, for Pine Bluffs, electric infrastructure improvements as well as the public works building. "Looking back historically is beneficial to plan for the future" said Bishop. It was also mentioned getting a feel for how many dollars and when the city will start receiving the money to get a better understanding of how to proceed. Historically there has been about a 3 month lag from when the tax goes into effect to when the revenue is received. It is estimated that the money from the May election, collection beginning in October, will not be seen until January 2018. To recap it was approved by council to hire Todd Bishop, Keiser Wealth Management to represent the town of Pine Bluffs to speak to banks and investors regarding bidding on bonding of the revenue received for Pine Bluffs share of Proposition 1,2,3,4,5, 8 and 9, in all or part.

Back at the end of February 2016 proposal was brought before Pine Bluffs governing body for Jerry Lamb to enter an apprenticeship program for electrical lineman. Leg work involved for the town of Pine Bluffs to start their own did not make sense with an employee pool their size. High West Energy was contacted to let Lamb work in their program. Some concerns discussed was liability coverage on the job training with High West Energy, putting together the agreement between the town of Pine Bluffs and High West Energy as well as Lamb continued employment with the town after he received his Journeyman Lineman certification. These issues voted on and it was approved to let Lamb take some of these classes with lineman college. Lamb worked through the program on his own and on his own time to see if the interest was still going to be there, completing 6 classes and passing everyone of them. Working with Michael Broad, Office of Apprenticeship, has reach out to see if the town of Pine Bluffs would like to move forward with the program. It was approved to get Lamb enrolled and to move forward with the lineman certification.

Discussion on change order 01 to the North Well Field Project was also approved for the water line loop from Wyoming Malt to Beech St, back on the east side of the industrial area. This would add a couple fire hydrants to the east of Wyoming Malt as well as valve and tees for future hydrants, with the potential to facilitate new businesses.

Pine Bluffs will host the WRPA (Wyoming Recreation and Park Association) spring work shop, soccer is concluding this week, Halloween Carnival on Halloween, Christmas at Home, trees that were saved from the city park to be made into benches for the park, closing date on the Connors Building, changing the council meeting date from Dec. 4 to Dec 5 due to conflict with Christmas at Home, representative attending Economic Forecasting for Eastern Laramie county, proclamations was proposed for national apprenticeship week in Pine Bluffs and representative attending the all day seminar on the State of Aviations, Nov. 14; were some of the announcements made.