Pride of the Spuds 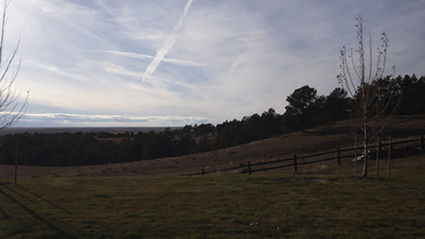 A look out over Donald Brown's property.

Outside of Pine Bluffs, on the west side of I-80 interstate, is irrigated farm land that is planted in potatoes belonging to Donald Brown. A third generation potato farmer, he is also claim to "the last potato farmers" in the area. Which Brown grows approximately 4 different varieties. First "generation" of potatoes are started in a greenhouse with a slip of potato. Brown recommends that the ground rest every three years, to yield a better crop.

Brown finds it interesting that in January 1940, 225 car loads of potatoes were washed and package for shipment at the Herbert Campbell Co., that sits along the railroad tracks north of Pine Bluffs. In years past when the large amount of shipment of potatoes would keep the farms busy all winter long. The Herbert Campbell Co. building belongs to Brown these days, although it sits on railroad leased ground, empty, due to the need for repair after last years hail storm. Brown ships approximately 100 cars by semi-trucks instead of by railroad cars, which is a far cry from years past. As well as the large amount of potato farming that was done in Albin, Burns and Pine Bluffs the Browns operated a fresh pack; however now days they do 120-150 acres of certified seed potato are farmed. The difference between seed and packaged potatoes, are that seed potatoes are free of all disease that could damage the crop, which Brown grows under the Nebraska certification, Brown certifies oat seed through the university of Wyoming. Brown has two potato storages, one in Pine Bluffs and one on the west farmland that belongs to him. Brown has a farm hand that works along side of him and feels that this is what he needs at this stage of his life.

Seed potato farming is quite extensive and it requires checking on the plants 3 times during the growing season. Brown also had the Department of Agriculture that checks his ground for Nematodes, which is a bug. Another pest is the potato stilt, which is a bug that blows in and releases a toxin in the leafs that goes down to the roots and causes the potatoes to not grow.

It is mind boggling the number of different types of seed potatoes that are grown in the eastern Wyoming and Nebraska farm land. Certification from Nebraska is done by Potato Certification Association of Nebraska and the University of Nebraska Institute of Nebraska. Brown is the first one on the list, even though he is one of the smaller growers. One of the potatoes that Brown talked about is Burbank Russet, which is a great potato for processing (it is very popular in Idaho) and baking.

The beautiful property that Brown lives on, south of Pine Bluffs is pasture land for his small heard of market calves. This property was purchased by Brown and his father. Brown was a member of the National Potato Board from 1996-1998, where he met several interesting people, that he is still keeps in touch with. These days Brown and his wife Ellen, a former French, Spanish and English teacher, spend a lot of their time walking or riding, on horse back, the rolling hills of their property.