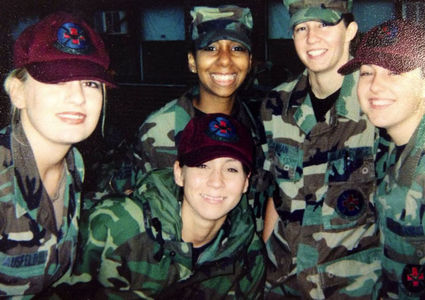 Senior Airman Erin Callahan with a few of her fellow troops. Back right

Trading her volleyball uniform  for a uniform in the United States Air Force, was a strong choice, with no regrets for MSgt Erin Callahan.

She gave up college and  a volleyball scholarship upon graduating from high school in El Reno, Oklahoma in 1997 and went into the medical field of the Air Force.

Her first assignment sent her to Langley AFB, near Hampton, Virginia. This was an assignment that would last 8 years in her career. Her first duty assignment was in the labor and delivery room at the base hospital. "I remember one night, when we delivered 11 babies, one of them being a c-section." Callahan recalls. "It was a night I will always remember" she stated as she reflected on the events of the night, and one of the births being complicated.

Volunteering for special duty assignment found Callahan in Buffalo, New York, where she found herself in charge of MEPS (medical testing) for newly enlisted personnel. After being stationed in New York for some time, Callahan headed overseas to RAF Lakenheath in England, where she was stationed for 4 years. It is the largest USAF base in the United Kingdom, and is home to the 48th Medical Group.

Numerous deployments have sent Callahan to the middle east. Her first deployment was to Prince Sultan AFB, Saudi Arabia. While there, she did duty as an Escort for TCNs (Third Country Nation citizens) and met individuals from India, Pakistan and Afghanistan. While there, Callahan pinned on her next stripe and was now a Senior Airman, E4.

While at her duty station at Langely AFB, Virginia, Callahan was present for medical triage for personnel after 9-11 at Fort Dix. In the first 21 hours, they set up nine tents and waited. They were there to assist with the wounded. Callahan spoke with soft heartfelt voice as she described how they were there to help, and like many of the hospitals in the area had many chairs set out for the walking wounded, none came. "They all had died," she said solemly, "We were the first team set up for the military, and all we could do was watch."

Their sleeping quarters were tents, and beds were uncomfortable due to age, springs missing. "After falling through several times,  we just put the mattresses on the floor and slept there!" Callahan said with a grin. She referred to her bunk as "Eileen!"

Upon returning home, they were immediately put on standby. On October 1st, 2001, the crew found themselves in Saudi Arabia. They were the first EMEDS deployed during war-time. When first arriving, they were stuck out on the tarmac for several hours, while they went through "customs" before heading to country.

After hours of heat, searches, and such, they would spend three weeks there. Callahan would experience her first Anthrax shot. "These were miserable, you couldn't use your arm for a while, and they burned!" she stated, "and they never got any easier to have!"

Finally arriving in Oman, they were given their "tent homes" and settled in. During the many weeks there, with the British, French, Australians, and South Koreans, friendship were made, as well as learning customs, and money exchange. One of the memories she has, is building a Statue of Liberty as a morale booster. 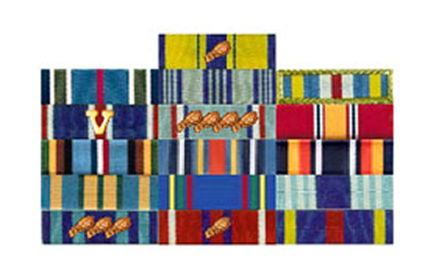 After returning home from R and R, it would only be a matter of weeks before Callahan returned to the middle east in support of Enduring Freedom and Iraqi Freedom.

After much time overseas, Callahan headed back to the states, and stationed at F. E. Warren AFB, at Cheyenne, Wyoming. Her career changed slightly and she found herself in Flight Medicine. This was a cross train, and has been a change she has welcomed.

Her draw to the military came from her dad, who served in the United States Army, and her grandfather who held the rank of MSgt in the United States Air Force. "I wanted to do something fulfilling and that lead me to the military." Callahan has earned numerous ribbons and medals. Upon her retirement from the Air Force, next August, she plans to have displayed in a cabinet next to her grandfather's her ribbons and medals.