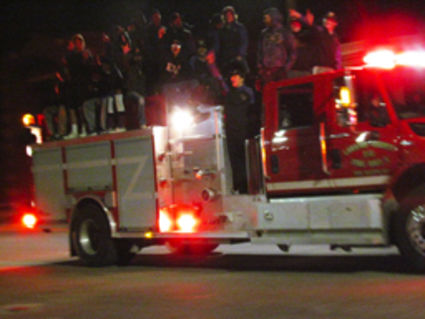 When the Hornets came home from state the Town of Pine Bluffs were waiting anxiously to welcome back their defending state champs!

Through the entire battle it took to get to state the Hornets showed what true sportsmanship truly is. With great teamwork and dedication this team went all the way, and brought home the one thing they all wanted...another state championship.

The town was filled with supporters and they showed their pride for the Hornets as they followed the fire trucks through Pine Bluffs. Not only were the Hornets the state champions again, but they were also undefeated with a record of 11-0.

Pine Bluffs showed how proud of their football players they are, and all of the dedication, time and effort, it took to get them where they are at now.

Already the Hornets are setting their sights on next year.