Keeping the crop in Pine Bluffs 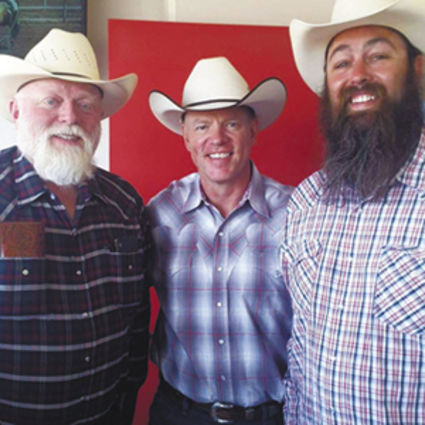 Purdy Farms is a small family run ranch located in Pine Bluffs, WY. Gene Purdy's newest adventure is growing barley and wheat for Wyoming Malting and Pine Bluffs Distilling. Purdy speaks of growing the barley and wheat, however he does not grow the yeast that goes into the distilling of vodka. Purdy said, " This is the greenest distiller in the nation." There is no waste stream, as he grows the barley and wheat for distilling vodka, the "spelt" that is left after (which is not suppose to have any alcohol in it), is taken back to the farm to be feed to the cattle, which produces the fertilizer that is put back on the land, making ready for more wheat and barley planting. The business is bigger than what he had originally envisioned; however the building is just like the drawing he had done on a napkin, awhile back.

Chad Brown, one of the other owners of Wyoming Malting and Pine Bluffs Distilling explains, "Wyoming is the fifth-largest barley producer in the nation. Like many Wyoming raw resources, the grain is shipped to retailers at a markup, and finally bought by consumers for even more money. I want to keep that money in Wyoming." "The malting process is a value-added process for agricultural products. This area grows lots of barley, millet and wheat. Our business will help those farmers by giving them somewhere to sell. Then we can provide that product to brewers and distillers around the state."

The wheat and barley is provided by Gene Purdy of Purdy farms, who is also a part owner in Wyoming Malt and Pine Bluffs Distilling. Purdy states, "the best way to enjoy $3.00/bushel barley is to drink it!"

First bottling of Rock Ranch Vodka (which comes from the original name of Pine Bluffs), was November 8 at the Wyoming Malting Plant. Laughter rang throughout the plant and show room as the bottles were being filled and labeled. Some of the visitors were giving free labor in bottling the vodka, however you did not have to work to enjoy the free food or drink. The vodka will be available on the Wyoming Liquor website on Monday, November 12 to be purchased, after approval has been received by the ATF (alcohol, tobacco, and firearms federal division) in Cheyenne. Out of the 600 bottles filled, 30 cases were signed up for at the Bottling Party, that was attended by approximately 100 guests.

The distilling process is a week long process. The wheat and barley is put into a 500 gallon mash tin and cooked with a mixture of water and grain, at 180 degrees for 90 minutes, yeast is added after cooling down, a few days of fermenting is the next step, all is transferred to a 500 gal still were all of the alcohol is drain, then transferred to the 300 gal still to have the process repeated. What comes out of the final still, is 190 prove alcohol that is cut by water, using a formula, for the finished product of 80 prove vodka.

Although the Craft distiller Industry is about 20 years behind the craft Beer Industry it is "booming." About 10 years ago the tax requirements were changed, to only being taxed on what you produce, which has opened up the industry to smaller operations. Federal Alcohol Production License, as well as being inspected by county Health Inspector, is required to produce the vodka.

Pine Bluffs Distilling is all a part of Wyoming Malting, which provides malt for local home and industrial brewers. This is the first licensed distillery in the history of Laramie County, per the company's facebook page and is a family owned business. Kathy Brown, Chad Brown's aunt, is the third owner. Pine Bluffs Distilling will be hosting their "Soft" Grand Opening on Friday November 17 from 4-8 p.m. at 322 N. Beech, Pine Bluffs, WY.