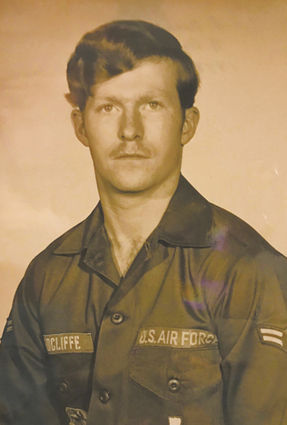 Charles L. Radcliffe graduated from high school in Rolling Prairie, Indiana, a small town with the population of 400.

It was not his immediate goal to join the military. First he worked construction and oil.

When the industry suffered a low time and he was laid off, he decided to check out the military and see if it was right for him. "I checked out their programs and schooling, and felt the United States Air Force had the best to offer. So I enlisted." stated Radcliffe.

After basic training in Texas, Radcliffe found himself headed to Chanute AFB, Illinois. It would be a 28 week training school on missiles, before he would head out to his first official assignment. Passing tests and background checks would set him up for his official duty on the Minuteman 2 and Minuteman 3 missiles.

While at Grand Fork, he had an opportunity to escort the Chaplain of the Air Force on a tour of uniforn one for the missile "deep hole" inspections. "As we were going down the elevator work cage, the chaplain became slightly nervous, but it wasn't until we were almost all the way down, and the rope sort of jumped and we dropped 6 inches or so that he got real scared!" stated Radcliffe. "I will never forget his fear or his words!" he added.

This would lead him to F.E. Warren AFB, in Cheyenne, Wyoming. This would become his permanent home, as he fell in love with Wyoming and chose to stay.

While at Warren, Radcliffe, would go TDY (temporary duty assignment) to other bases with missiles. One such base, was Vanderberg AFB, in California.

Radcliffe spent some TDY in the middle east, and it is an experience, not easy to talk about.

While missiles were his main mission in the Air Force, Ssgt Radcliffe, would be active in many programs for the military and their families. 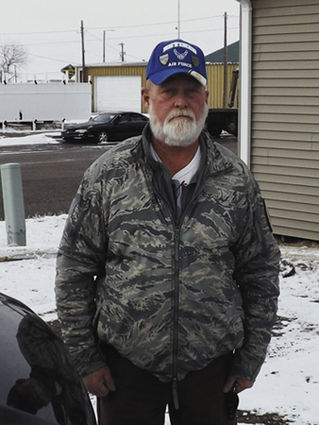 In 1980, Radcliffe started a program to help some of the families having it hard. This program was called Operation Christmas Basket. He was also be involved in "Meals on Wheels" for homebound people as well as "Friends in Blue" a program for mentally and phyically challenged individuals. This program would help individuals achieve goals through a competition. "We would push their limits and help them achieve goals to better themselves. This program was for teens to 40-50 year olds." Radcliffe said.

Upon retiring, Radcliffe worked for base lodging as a maintenance supervisor, then for Wyoming Weatherazation. "It was a good life. I would not change a thing, and would do it again in a heartbeat." Radcliffe reflected.

"Always put your best foot forward, and keep your nose to the grindstone" was his advise to those thinking of entering the military. "I love this country and I love this flag! I will always stand for my country and serve her."