Celebrating years of service at the Texas Trail Market 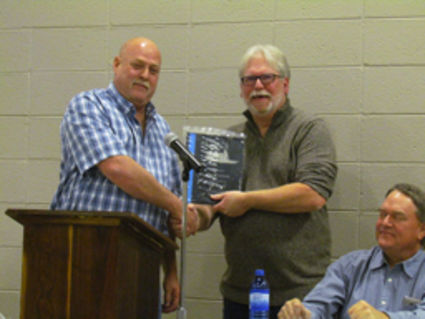 Don Herman presents General Manager Bill Cushing with a plaque congratulating him for 20 years of service with the Texas Trail Market Coop.

Spirits were good and attendance was at a three year high for the annual meeting of the Texas Trail Market Coop.

A dinner of ham, potatoes, and green beans was served by the board members to members and their families. After dinner, ice cream was handed out by members of the Texas Trail Markets's courtesy clerks.

President Don Herman, called the meeting to order at 7:00 p.m.. with the Pledge of Alligence. The previous meeting's minutes were voted to be passed over and not read.

Herman gave a brief statement as to the financial report which was presented to all upon arrival.

Election of board members whose terms had expired was next on the agenda. A motion from the members was made to close the nominations and accept the nominees to fill the three vacancies. Re-elected were Don Herman, Rachel Lipska and Jackie Fornstrom.

General Manager, Bill Cushings came to the podium and spoke to the members. He thanked Sue Stevenson for her years of service prior to her retirement after 37 years. Thanks were given to all the members for supporting the market, and all the businesses who came forward to help with different projects. Brian Heitoff of High West Energy was specifically thanked for the donation to the lighting project. To get new lighting, the project would have cost the Texas Trail Market in excess of $20,000. Between High West Energy, $10,000 and a grant from Wyoming Business Co., the market's cost was around $5,000.

Cushing then called Linda Coffman to the podium, where she was presented with a plaque commemorating her 40 years of service to the Texas Trail Market.

Cushing was then surprised with a plaque for his commited service to Texas Trail Market for 20+ years. He spoke of how the community supported the market, and re-opening the market on Sundays noon to 6:00 p.m. had been a good move. "We have had a good response to our Sunday hours, and this past Sunday, was our best Sunday yet!" stated Cushing.

A big thank you was given to Pine Bluffs Feed & Grain, Matt Hahn for loaning their fork lift to the market, since theirs had broke down.

"We have been going on since 1948, and with community support and our members growing, we will continue to be a community market." Cushing said. "We all support each other in a small community and here we are the owners." he added.

In closing, Cushing added that the market would be nothing without the dedication of our employees. He thanked everyone for coming, and hoped the winners of the door prizes enjoyed their winnings, and with the closing of the meeting wished everyone a "Merry Christmas".