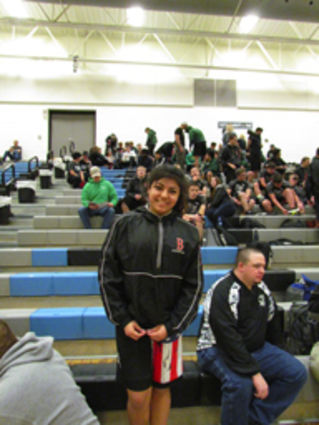 Burns/Pine Bluffs wrestler, Diana Sanchez prepares for her first match of the season.

This is her second year on the team. She wrestles in the 150 lb category.

When asked how she did last year Sanchez said, "I think I did ok".

She too was looking forward to the season but had some concerns. "I think that the other wrestlers were a bit bigger this year" she stated.

Sanchez is the first female wrestler with the Burns/Pine Bluffs team.

Her performance at the Charlie Lake Tournament gave her 5th in the 150 weight division.