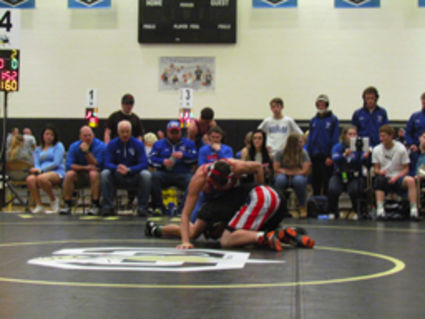 Burns/Pine Bluffs wrestler Mitchell Miller and Jake Smith from Douglas battle to the mat for the win. Miller takes the victory.

Wrestling season is finally here and the team is pumped up and ready to go. Pictured above is the 2017/18 Burns Pine Bluffs Wrestling Team.

December 8 started the Charles Lake 2 day wrestling tournament in Cheyenne. This meet was attended by numerous teams from across the area. Burns Pine Bluffs, Glen Brook, Sidney, East, South Torrington and Sidney just to name a few. It looks to be a very exciting tournament.

This is just the start for this young team. Coach Dan Clayson is looking forward to this tournament as a great learning experience for the younger wrestlers and a tune up for some of the returning members.

The first match of the 2017/18 season pitted Burns Pine Bluffs against the Douglas wrestling team. Austin Montdragon represented the Burns Pine Bluffs team and Cody Blair for the Douglas team. Austin wrestled hard and quick but the Douglas wrestler was just a little faster and pinned him in the first match. That is not the way that they were hoping to start the season. "We have a young inexperienced team, and we will keep growing and get better as the season goes." stated Clayson. 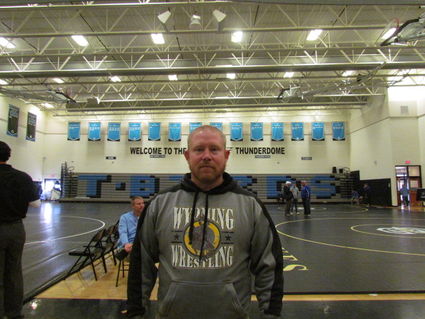 In an interview with Coach Clayson prior to the tournament starting he stated that he was looking forward to this tournament as a great learning experience and tune up for the rest of the season. Coach Clayson stated, "He only had 2 seniors and 2 juniors returning". With a team of 26 wrestlers that means that there is a bunch of new and second year wrestlers looking to make their mark. Coach Clayson states that "The team is made up of 11 Pine Bluff members and 15 Burns members". There is one female member on the team. She competes just like the male teammates and is anxious to prove her worth. Coach Clayson says "That they are in a rebuilding time". All these new and young wrestlers need experience and time on the mat. Practice will only take you so far. You need the "mat time" to get the experience and instincts to wrestle. Coach Grayson was looking forward to this season and watching his team grow.

An interview with three of the Burns Pine Bluffs team prior to the tournament, - Kyle Thurin, Austin Mondragon and Mark Merryfield gave a positive goal. All 3 were anxious for the meet to begin and show their stuff. They were excited about this season and thought that the team was going to do great and surprise a bunch of teams.

The first match of the 2017/18 season pitted Burns/Pine Bluffs - Austin Montdragon against Douglas - Cody Blair. Douglas took the first victory of the day.