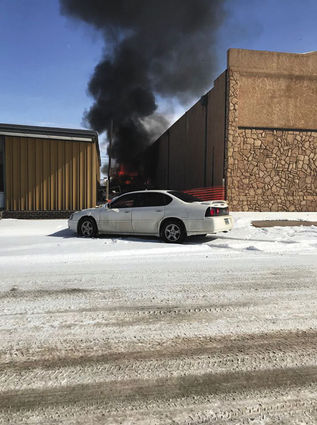 moke billows from a fire in the alley behind Farmers State Bank in Pine Bluffs Friday. Fire crews responded to the scene shortly after 1 p.m. A camper and a car were destroyed in addition to the bank suffering cosmetic damage

A fire in Pine Bluffs Friday destroyed a camper trailer and damaged a nearby building.

Shortly after 1 p.m. Friday, crews from Laramie County Fire District 5 in Pine Bluffs were dispatched to the 100 block of South Main Street for a report of a camper fire behind Farmers State Bank.

The first fire truck was on the scene about six minutes later, according to a statement from the fire department.

LCFD 5 Chief Derek Walls said the first personnel on the scene worked to prevent the bank from becoming involved in the fire. The bank did suffer cosmetic damage, but crews were able to prevent an...