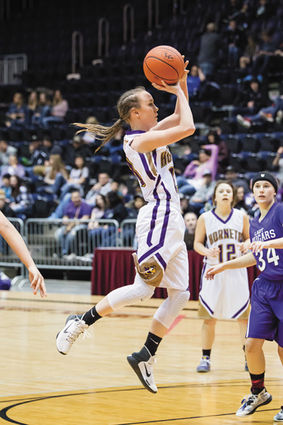 Maddie Fornstrom attempts a shot against Wind River at the 2A State Basketball Tournament in Casper Friday. The Lady Hornets suffered an early loss to Lovell, but still came away with a consolation trophy

Unfortunately, that's how their state tournament started, but they were able to come away with a consolation win.

The Lady Hornets got off to a slow start against Lovell, giving up 24 turnovers.

"We did not play good basketball against Lovell," head coach Lindsey Forbes said. "You can't give up 24 turnovers and expect to win."

Forbes said she thought the slow start was due to the majority of the team having never played on the state stage. It...