Pack 109 Takes Pack of the Year 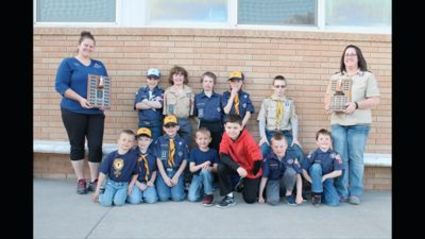 It has been nearly a year for the re-established Pine Bluffs Cub Scout Pack 109 to be up and running. The newly reformed pack started out with approximately 12 members and have grown to 15 members losing a couple along the way.

Pack 109 was nominated for several awards through the district. Bobbi Arasmith and Heath Stecklein nominated the Pack for Pack of the Year, and Cub Master of the Year for the Frontier District. They won.

This energetic pack, has set in motion a pace that brought them fame. In March they competed in Kimball, Nebraska against the Cub Scouts there in a Pinewood Derby,...