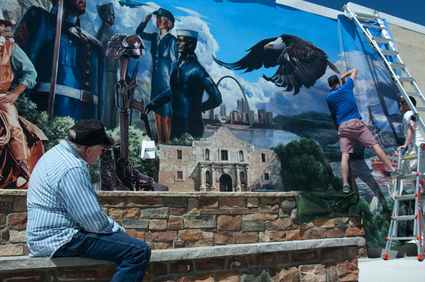 Pine Bluffs resident Larry Silvey looks on as Lance Walker and Devin Andrews of Salt Lake City-based Visibility Signs and Graphics install a mural titled "America the Beautiful" at Pine Bluffs Veterans Memorial Plaza Tuesday. The mural has been in the works for a number of years now and depicts American landmarks and tributes to service members. Silvey organized the project

The Pine Bluffs resident was running errands when he drove by Veterans Memorial Plaza in Pine Bluffs.

Silvey, the driving force behind the statues depicting service members at the plaza, has been working to install a mural at the plaza that shows famous American landmarks while also honoring veterans.

Last week, Silvey told Pine Bluffs Town Council members that the mural was to be installed on Monday, but bad weather prevented that.

So he was surprised when he drove downtown and saw Devin Andrews and Lance Walker of Salt Lake City'...