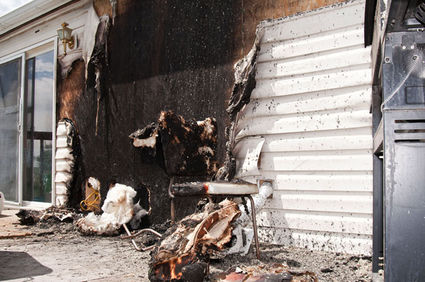 A burned chair rests on the porch of a home that was severely damaged in a fire Monday afternoon northeast of Pine Bluffs. Firefighters from Albin, Burns, Carpenter and Pine Bluffs responded to the incident.

A still-lit cigarette contributed to a fire that severely damaged a home in rural Laramie County Monday.

Firefighters from Pine Bluffs, Carpenter, Albin and Burns were dispatched to a home located on Road 158 at 4:03 p.m. Monday.

Scott Zimmerman, the home's owner, said the fire was caused when a resident attempted to extinguish a cigarette in a bucket. Zimmerman said the person thought the bucket had water in it.

Zimmerman said a few minutes later he smelled smoke and saw that the side of his home was on fire.