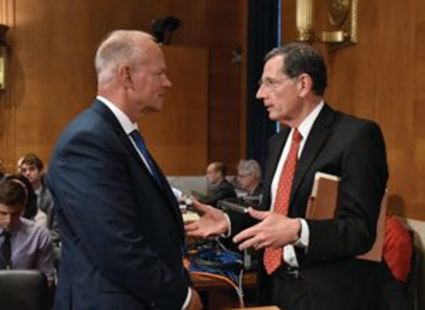 WASHINGTON, D.C. - Today, U.S. Senator John Barrasso (R-WY), chairman of the Senate Committee on Environment and Public Works (EPW), welcomed the Honorable Matt Mead, governor of Wyoming, to the committee. Mead was testifying before the committee at a legislative hearing on discussion draft legislation, the Endangered Species Act Amendments of 2018.

The legislative hearing focused on draft legislation released by Barrasso reauthorizing the Endangered Species Act (ESA) for the first time since 1992. It emphasizes elevating the role of states and increasing transparency in the implementation of the ESA. It also prioritizes resources to better meet conservation goals and provides regulatory certainty to promote conservation and recovery activities. The draft bill has received broad support from stakeholders, state and local governments, and conservation organizations.

Barrasso worked with the Western Governors' Association (WGA) in drafting the legislation. The bipartisan WGA has stated that the chairman's discussion draft legislation is generally consistent with the WGA recommendations for modernizing the ESA and includes provisions inspired by the association's Species Conservation and Endangered Species Act Initiative, led by Mead.

Barrasso introduced Mead to the committee prior to his testimony. "I would now like to introduce Wyoming Governor Matt Mead, who has been serving as governor since January of 2011," said Barrasso.

"Born and raised in Jackson, Wyoming, he graduated law school from the University of Wyoming. Since then, he has engaged in private practice of law, as well as worked as a prosecutor and United States Attorney. Governor Mead has served in the past as chair and also vice chair of the National Governors' Association's Natural Resources Committee.

"He has also worked as the co-chair of the State and Federal Sage Grouse Task Force. From 2015 to 2016, he served as chairman of the Western Governors' Association, where I mentioned before, he led the Species Conservation and Endangered Species Act Initiative that serves as the inspiration of the discussion draft we are examining today.

"Governor Mead also has a farm and ranch business in southeast Wyoming. I hope Governor Mead will tell us about his ESA experience in Wyoming and within the WGA in balancing the interests of citizens, while efficiently and effectively conserving wildlife.

"Governor Mead, it is an honor to welcome you as a witness before the Environment and Public Works Committee. Thank you for traveling to Washington to be with us today. I know Frontier Days is coming to Cheyenne and you are going to be very busy over the next week and a half at home but I am so grateful that you have taken time to be with us today," said Barrasso.

In his written testimony, Mead outlined how the WGA's approach to species recovery has proven successful. While WGA chair, Mead led the Species Conservation and Endangered Species Act Initiative, known as the Initiative. "This Initiative sought to (1) create a mechanism for states to share best practices in species management; (2) promote and elevate the role of states in species conservation efforts; and (3) explore ways to improve the efficacy of the ESA," said Mead. This effort brought "a diverse group of stakeholders together to explore ways of improving the ESA and species conservation generally." The Initiative helped the WGA learn about several successful approaches to species management, leading the WGA to adopt bipartisan policy resolutions to improve the ESA.

Mead detailed how the discussion draft legislation contains similarities to WGA's approach to species conservation. "In 2016, the FWS [U.S. Fish and Wildlife Service] adopted its National Listing Work Plan to prioritize substantial 90 day findings and ensure decisions are made on petitions within seven years." The discussion draft would codify the Work Plan, ensuring threatened species are prioritized.

Mead also discussed the critical role that states play in species conservation. States have unique conservation challenges and state wildlife agencies are familiar with the resources that are needed to address those challenges. Mead said that the discussion draft will help improve the ESA through a strong state and federal relationship. "It contemplates states leading recovery teams, developing and implementing recovery plans, consulting with federal agencies in a meaningful way on all aspects of ESA implementation, and providing helpful species data to the FWS. Each of these provisions can lessen resource strains on the federal agencies, lead to faster and more robust species recovery, encourage innovation in species management, and engender broader support for the ESA."

Mead said that the discussion draft offers solutions to make the Endangered Species Act more effective and improve species conservation. "We have an opportunity to improve the Endangered Species Act for wildlife and for people. We can encourage innovative conservation practices that obviate the need to list species. We can facilitate faster and more cost effective species recovery," Mead said.