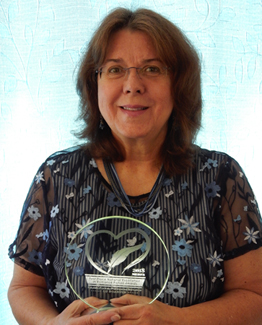 Liz Roadifer with her award for National Excellence in Romance Fiction.

This is the fourth award her story has won. Other awards include 'The Catherine', 'The Sandy', and 'The Sheila' awards.

The story is about a pesky fairy that accidentally transports a woman to Peace & Prosperity, a secret mountain town in Montana, full of magical beings including elves, dwarfs, wizards, trolls, and cyclopes. It has danger, romance, humor and suspense. And, of course, a happily-ever-after ending.

This is the first in a series set in the magical town of Peace & Prosperity. Roadifer is currently working on the sequel, 'The Trouble with Pirates'.

Roadifer also published another series, 'The Oracle Suspense series. This is a series of psychological thrillers about a Wyoming jury consultant who teams up with a New York Police Department detective to solve crimes in both New York City and Wyoming. The first book in the series is 'This Time Justice' was a Semi-Finalist in the Amazon Kindle Book Awards. The sequel, 'Ambushed' is currently an ebook, with the print version due out in the fall.

Roadifer is a native of Clifton, New Jersey and has made Pine Bluffs her home since 1983. She had moved to Wyoming in 1974 to attend the University of Wyoming, where she received a degree in anthropology.

After meeting Gary Roadifer, they were married and lived on the Wind River Reservation where her husband taught school.

Roadifer worked as a substitute teacher and part-time at the library in Pine Bluffs. It was while she worked at the library, Roadifer got her motivation to write. She was working with Allie McDowall, when they were discussing the incoming books. "I could write better than this!" she said to McDowall. McDowall responded with, "Why don't you?" and the motivation was on!

Within two years, Roadifer sold her first book, and has continued on for a series and then some.