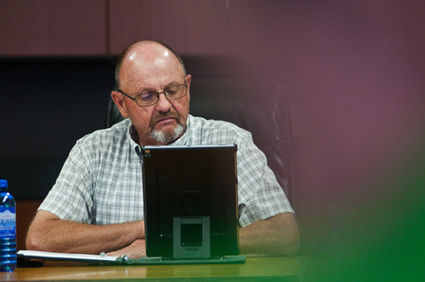 Pine Bluffs town council members on Tuesday passed an ordinance that would make it illegal for pet owners' dogs to bite people.

Currently, the town does not have an ordinance on the books regarding dog bites.

The ordinance came about as town officials were exploring modifications to the town's bond schedule.

Town Attorney Alex Davison said it was then that officials realized the town doesn't have an ordinance on the books.

Ordinance 2018-03 must pass two further readings to be enacted into municipal code.

Town Treasurer Kim Patterson said she has sent out letters to Pine Bluffs pet owners on a monthly basis for some time now notifying them to register their dogs.

Dog owners are required to pay $5 per pet by the first of the year.

About 45 residents have not responded to the notices.

Council members agreed that, at this point, it would be best to turn the matter over to law enforcement.

Council Member Tom Mohren said that if residents have not responded to the notices at this point, they probably won't. Having a police officer knock on their door may change that, he said.

"We've sent three letters already, a fourth one isn't going to make a difference," he said. "I bet if it goes up in front of a judge, they will pay for a tag."

The plans are required to be brought before the council each year before Oct. 1.

Changes include removing the Pine Bluffs Daycare Center from a first priority removal plan to second priority. That's due to the town no longer managing the building.

The Pine Bluffs RV park was also removed from the list due to it no longer being managed by the town.