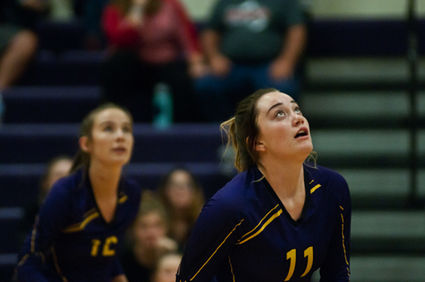 Hyleigh Fornstrom looks for the ball during a home match against Yuma (Colo) Friday in Pine Bluffs. The Lady Hornets lost 3-0.

It wasn't the home opener the Lady Hornets wanted Friday night here in Pine as they dropped three matches to the Yuma (Colo.) Indians.

"Yuma is a great team and we gave them a game for the first one then played scared for the next two. We have to learn to compete. If you give 100 percent and lose, so be it. But when you play not to lose it doesnt work. It is a great lesson for us this early in the season," head coach Lisa Gilbert said. "We have a load of talent but we have to step on the court, trust ourselves and our teammates, and play with confidence."

It appeared that Pine Bluffs would give Yuma a run for their money, and in the first game, that was the case.

But a 25-9 second set took the wind right out of the Lady Hornets.

On a positive note for the Lady Hornets, they served 93 percent.

Looking forward, Gilbert said her team will work on quickening up the offense and blocking.

Pine Bluffs will compete in the Big Horn Tournament this weekend.

They are currently 5 and 3 on the season.