Pine Bluffs improves to 3-0 on year 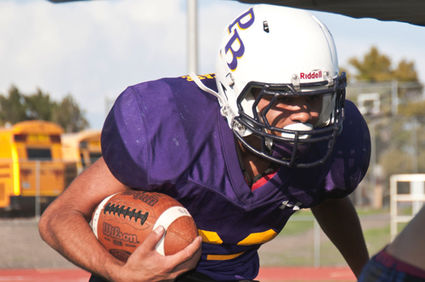 Isaiah Montanes runs the ball during a practice in Pine Bluffs Tuesday. Against Southeast, Montanes had 16 rushing opportunities, good for 64 yards. The Hornets will travel to Tongue River this week.

Pine Bluffs headed into Yoder having outscored its opponents 74-0.

In their first road game of the year, the Hornets defeated the Southeast Cyclones 28-0, improving to 3-0 on the season.

After being blanked in the first quarter, the Hornets got on the board scoring a touchdown in the second quarter.

They would score another touchdown and two more in the fourth.

"I thought we came out a little flat, but the kids battled through that and finished the game well. We are going to get everyone's best shot, and Southeast played well in the first half," Hornets head coach Will G...