New Equipment for a local Athlete 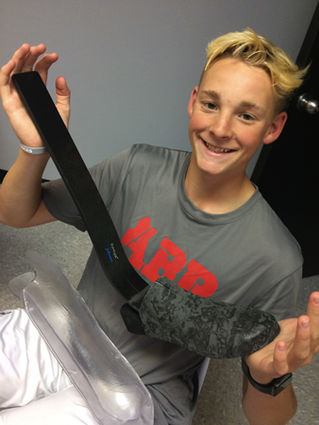 While in Nashville for his leg fitting, Derik was able to practice with two high school teams to test the leg on the line. Derik also received a new pair of shoes from Fleet Feet. Derik crossed paths again with Addrian Frederick who he met at Texas Longhorns football camp in 2016. Frederick, who played safety for University of Louisville Wabash College, put Derik through four training sessions in the new leg and taught him more efficient ways to play.

You are watching the Pine Bluffs Hornets and Burns Broncs football game. Two teams of boys who have grown up together, swam in the same pool of water and life. You know most of their stories, recognize their faces, may even be neighbors of their parents. And even though you cheer for one team or the other, you appreciate the love of the game in every player. And then, something unique, different, catches your eye on the Burns sidelines.

Love isn't always easy, painless or even natural. Derik Smith, a sophomore at Burns High School, knows how unnatural, painful and difficult having a love for a sport and a dream can be. When he was six years old, he was playing football in the living room and slipped. His leg shattered as if he was involved in a high speed car accident. "They told us I would have broken my leg playing cards at the table. I was glad I didn't have to blame football," he said.

The bone never healed and as Derik would find out a year later, it never would. He had Pseudarthrosis of the Tibia, a rare disease most people cannot even pronounce. While not life threatening, it was a little like dying for young playful Derik. After seven surgeries, Derik made the brave decision to amputate his foot, a procedure called a Syme Amputation. Cutting off just a part of the leg healed the disease and allowed Derik to play and run again. Derik was a patient at Shriners Hospital for Children in Salt Lake City since he was seven, and more recently a Patient Ambassador for the Shriners network who provide care and prosthetics to children at no cost to their families.

A few years ago, Derik began asking Shriners about a sports leg.

"I wanted to play football and I needed something lighter and quicker than my ten pound leg I was dragging around," Derik remembers.

The Pediatric Orthotic and Prosthetics services, POPs, fitted Derik in his seventh grade year with a blade leg. But it still was a loose fit and on more than one occasion, Derik's leg would stay behind as he tackled a ball carrier.

Not only was his prosthetic leg a burden, lesions on his tibia appeared again and fractured his leg.

"During basketball practice my eighth grade year, I felt something pop in my bone. I thought it was just shin splints but I had actually fractured my leg inside my fake leg, which is not usually possible," Derik recalls. Derik could not run and missed out on football and basketball his freshman year. That didn't stop him from throwing shot and discus on his "Iwalk" during track or competing at regionals and state wrestling that same year.

This past summer, Derik's mother found a camp for amputee kids. Nubability was not a pity party but a get up and do and achieve and be coached by athletes that didn't let missing a part keep them from being an elite athlete. At the camp, Derik was coached by Montana State Linebacker Koni Dole as well as Albany's second team all-conference defensive end Eddie Delaney. Derik impressed Dole and Delaney with his combine speed and agility, even with his non athletic prosthetic. After the combine, Derik remembers telling his mom, "I got good news and bad news. Good news, I ran a 5.3 40. Bad news, I broke another foot."

Derik was hard on his fake legs, breaking feet almost monthly because the parts are made for the demand in the market of prosthetics which is elderly diabetic patients who are not charging off the scrimmage line at a 180 pound man with a football. That would sideline him again waiting for a part. But he adapted and got pretty handy with duct tape and an Allen wrench. The Pine Bluffs Napa store helped out before the regional track meet this year by replacing nuts and bolts inside the leg. The coach's medical bag after Derik's seventh grade year starting looking like a tool kit as well.

Adapting, however, was not what Derik wanted. He wanted to excel. So, when the founder of Nubability took Derik aside and said he knew of a better way and a better leg at no cost to his family, Derik listened.

Derik submitted a grant to Amputee Blade Runner, ABR, which was founded because one man watching the Tennessee Shrine Bowl noticed Ryan Fann running to the sidelines to duct tape his broken prosthetic leg and running back in to play. That man fabricated a running leg for Fann who went on to run track at Tennessee State as well as earn a gold medal in the Paralympics. Fann wanted other amputees to be able to have the same opportunities and after becoming a prothetician, he teamed up with Aaron Fitsimmons, another prosthetician, and ABR was founded in 2011. It is based on the idea that giving someone one piece of equipment could change their life.

"He just wants to compete, and do it the same way as everybody else, no accommodations, no pity. If he makes the team and gets playing time, he wants to do it because he is good. But he has the same standard for those coaching him, if he is on the sidelines, he wants to be there because he is not good enough, not because he is missing a part," Derik's mother explained.

Getting a leg from ABR means advocating for better equipment for all amputees and educating patients who may have an amputation on what they can ask for, what surgery is better for a life in prosthetics, and that it is okay to speak up when something hurts or doesn't work the way you want it to.

Not only did ABR provide a lighter more elite leg for Derik, they also review his medical history and treatments. They educated Derik on what options would have been better, so he can help the amputees behind him to make informed decisions. For example, Derik would have been better if his growth plates were not pinned, a procedure done in order to get more prosthetic options. ABR explained to Derik the prosthetic can be better made to fit the leg not the other way around. And although the Syme amputation is working well, Derik would have benefited from having his bones bridged which he will need done eventually.

Derik's grant for a high performance sports leg from ABR is just the next step in his story. It may not be a "magic pill" to make him the strongest and best defensive end on whatever team he plays, he will have to put in the effort for that.

Derik is very focused when he says, "I try not to regret, and remind myself there was nothing else that we could have done (instead of amputation). When Mom would have sad moments about me losing my leg I would tell her "It's football not feetball, Mom, and I am going to play."

"I may not play like the other guys on my team, yet, and I may have to work harder, run faster and endure endless sideways glances and expectations of failure. I think by learning at the age of seven how big a loss can be, I am better at accepting dreams that die to feed new ones. Reality may not be as perfect as dreams, but I can inspire, live and play as much as I want." 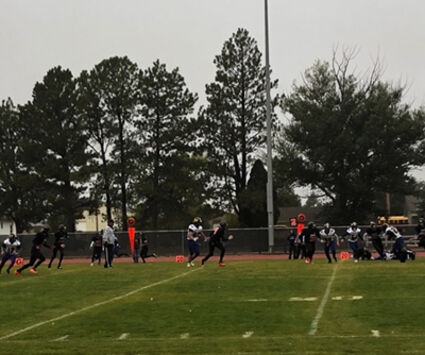 "Life is bigger than any football field. Whether I play one game or 230 more games, my life will go on. Everyone, one or two or no legs, can have great, realistic opportunities to inspire and live and play."

"Each morning when I put on my leg and am able to walk or run even with the heavy burden of daring to dream against reality and a responsibility to inspire others to live their dream. I am humbled and thankful for each step after my amputation and the people who helped me get and stay on the football field. I look forward to more elite and faster steps I will take with ABR and my new leg."

You watch a local football game and see something that sets one player apart from the rest. You see a boy loving life and living his dream because he is playing football. If that is all you see, that is the way Derik prefers it.