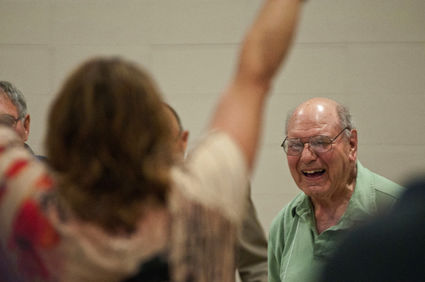 Everyone has a story involving John Marquardt - and many took place in a small airplane.

Davison learned to fly at the instruction of Marquardt in 1984.

One day the young aviation student was reviewing emergency procedures with Marquardt, specifically, what to do in the event of an engine failure:

Check your magnetos, switch back and forth between fuel tanks if applicable.

And finally, if all else fails, look for a place to land.

"That's all well and good but what if this happens in the dark, because I'm going to be flying at night," Davison remembers asking.

The answer: Run through the same procedures. When you think you're getting close to the ground, turn your landing light on. If you don't like what you see, turn it back off. "As if that would make everything go away," Davison said.

Davison's anecdote was one of many heard the afternoon of Friday, October 12 as people from all over the country celebrated Marquardt's service to the Pine Bluffs Municipal Airport and Community.

And, as of Friday afternoon, the airport has a new name: John K. Marquardt Field at Pine Bluffs Municipal Airport.

During the ceremony former students, colleagues and friends of Marquardt spoke about experiences they'd had working or flying with him over the years.

They all shared a theme of a man who has a witty sense of humor, loves flying and his community.

One former student, Gary Schaeffer, had just purchased a Cessna 182 sometime in the 1980s. He needed 10 hours in the plane to be certified to fly it.

So he called Marquardt.

"He said it's five hours to Las Vegas and five hours back," Schaeffer said. "So we flew to Vegas."

Schaeffer spent many hours in the cockpit of a Cessna discussing anything and everything with his instructor and close friend.

One of those conversations took place on the end of a runway in 1988.

Schaeffer had decided run for mayor in Cheyenne.

"John and I sat for hours. He was geinuinely concerned with why I wanted to do it - we talked about it and talked about it," Schaeffer said. "As you all know, a few years later, he decided to run for mayor in Pine Bluffs.

"So we sat at the end of some more runways."

Marquardt took his seat on the Pine Bluffs Town Council in 1989. Two years later, he was sworn in as mayor.

But Marquardt was serving the community long before that.

Pine Bluffs Mayor Alan Curtis said Marquardt made the airport a priority for the past 50 years.

"This is one of the few airports where you've actually seen growth," said airport consultant Jeff Wolfe. "There's a waiting lists for pilots and their aircraft. That's all through John's efforts."

Marquardt said he first caught the aviation bug as a young child when his dad took him to a field where a mail plane had just made an emergency landing.

The pilot was on the ground trying to get the engine started again. Marquardt was nervous about inching closer, but he did anyway.

"When they got it started it scared the ever living crap out of me," he told the crowd.

Still, that was the beginning of a lifelong love of aviation.

"He's put his heart and soul into that airport," Schaeffer said.