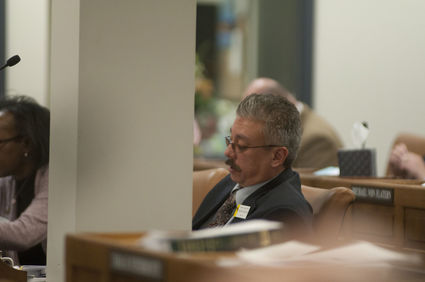 Wyoming State Senator Anthony Bouchard, R-Carpenter, listens to the Wyoming Senate on Monday. Bouchard is the primary sponsor of Senate File 75, a bill that would repeal most gun-free zones in public places throughout Wyoming.

Monday voted to keep a bill repealing most gun-free zones in to the Senate Judiciary Committee.

Sponsored by Sen. Anthony Bouchard, R-Carpenter, Senate File 75 would give the Legislature the sole authority to regulate guns in public places.

If SF 75 passes, Wyoming residents would be allowed to carry concealed firearms in government buildings and meetings such as local city council meetings and Legislative sessions.

People would also be allowed to carry concealed weapons on public school grounds.

Several members of the Senate are cosponsoring the bill along with Bouchard.