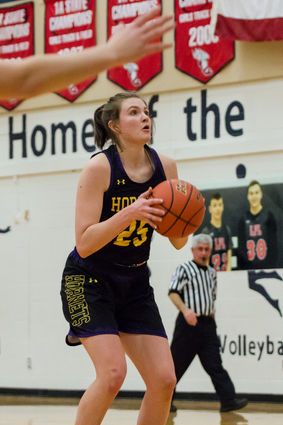 The team's 54-41 loss to Niobrara County (Lusk) came at the worst possible time, too: Senior Night.

In Friday night's finale, seniors Kammie Ragsdale, Torri Long and Paige Thompson were honored before play got under way.

Ragsdale went out on a good night, scoring 25 of the Lady Hornets' 41 points.

Long's sole attempt at a shot was good for three points.

On Saturday, Pine Bluffs traveled to Lingle for what would prove to be a redemption game.

In that game, Pine Bluffs' defense held LFL to single-digit scores in each quarter.

In fact, PBHS never allowed more than 6 points. LFL only managed to score 2 points in the second quarter.

Hyleigh Fornstrom also scored in the double-digits with 10 points.

At 5:30 p.m. Thursday, the Lady Hornets' post season will begin when they face Moorcroft at Wright High School.

They will play Moorcroft who is 14-8 overall but only 2-4 in conference play.

Pine Bluffs made easy work of Moorcroft in December.

Playing in their second game of the season at the Burns Winter Classic, Pine Bluffs easily defeated Moorcroft 82-46.

Should the Lady Hornets win the regional tournament opener, they will take on the winner of Big Horn and Glenrock.

They are 5-1 in their conference.

The Rams have not played Pine Bluffs this year.

Glenrock has, however, played Pine Bluffs and has lost mightily in both games.

Back in January, Pine Bluffs defeated Glenrock at PBHS 58-6.

Pine Bluffs was victorious in the second contest of the year, winning 53-6 in Glenrock.