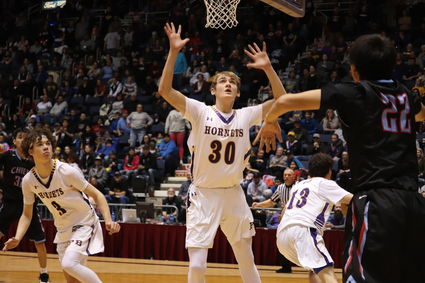 Donte Jacobsen looks on after attempting a basket during the final round of the 2A Wyoming state basketball tournament Saturday, March 2. The Hornets lost to Wyoming Indian in double-overtime, 69-67.

The Pine Bluffs Hornets came within seconds of earning their second state basketball title in as many years.

Instead, it was the Wyoming Indian Chiefs who found themselves storming the court at the Casper Events Center after a thriller that ended in double-overtime.

After falling behind briefly early in the game, the Hornets held a healthy, if not comfortable, lead over Wyoming Indian for most of the game.

Late in the third quarter, Pine Bluffs enjoyed an 11-point lead over Wyoming Indian and the Hornets appeared to be cruising to its third state basketball title in four years.