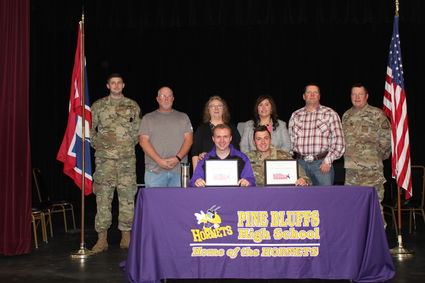 Two young men decided to be all they could be this morning at an official signing of intent to enlist in the Wyoming National Guard upon graduation. As parents Teresa and David Herman and Ana and Shawn Shmidl watched, Josh Herman and Bradley Shmidl accepted their enlistment promises from Sergeant First Class Kerry Wyatt and Sergeant Ethan Flick.

In a ceremony at Pine Bluffs high school Monday morning the two young men stood proud as they agreed to serve not only their country, but also their community in the Guard. "As the younger generation is coming in it's adding great minds, great spir...