Racing has gone to the Dogs!

Corgi races bring in the crowds 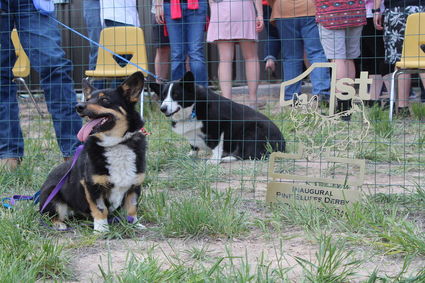 As the Saturday afternoon sun shone down on the unbridled and sweating dog flesh that milled around the track, the inaugural Corgi Derby was set to start. Dressed in their derby finery the corgi owners sipped Mint Juleps and Kentucky Mules while they waited for their heats. Five heats before declaring an overall winner almost 200 people stood outside the Pine Bluffs Distillery enjoying food from Butler Dogs and Fat Howards Chili.

At 3:30 p.m. race master Charlie Brown sounded the bugles and the first heat started. In a matter of seconds the Lander Corgi Racing Team started the day off right with Zappa snagging the first win. Master of Ceremonies, Haylee Hornbeck was scarcely able to catch her breath before Zappa barreled across the finish line. The second through fifth heats were just as quickly dealt with as winners Nora, Zeppin, Spike, and Radar finished out the final race billet. 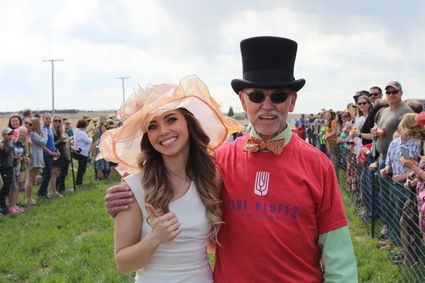 With a very small window to catch their breaths the final five corgis were brought to the track for the grand finale. In a breathtaking show of speed Lannie Hamilton's Zappa came screaming across the finish line with Radar coming in a close second. While not a photo finish, each corgi ran with purpose and finished the day with races to be proud of.

Erica Unruh was extremely pleased with the turn out for the day. A race that started out just as a way to have fun on a Saturday afternoon turned into an amazing event that raised $1100 for the Cheyenne Animal Shelter. Contenders from Colorado to Lander came out to race their corgis and the derby finery was as spectacular as anything seen in Kentucky that day.

The Lander Corgi Racing Team was able to seal the win in the first heat and for the day, but we'll have to come back next year to see if they can hold on to the crown.