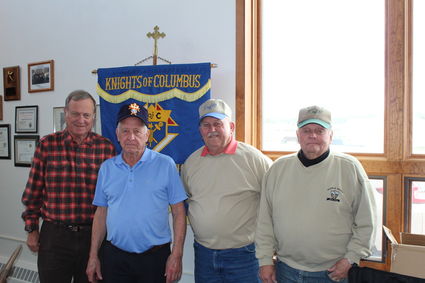 Bitter winds and heavy coats did not stop the Pine Bluffs Knights of Columbus from teeing off for their annual charity golf tournament this last Saturday. Several teams showed up to brave the elements and play nine holes with the promise of a pulled pork meal and several prizes.

Teams of four vied for prizes ranging from t-shirts to cash during the tournament led by financial secretary Dennis Talich. First place this year was a tie. Winners were the Tom Enright team, including: Mel Mollendor, Bob Corso, Bob Reynolds, and Tom Enright, and the Bryan Cushing team, including: Luke Steege, Gran...