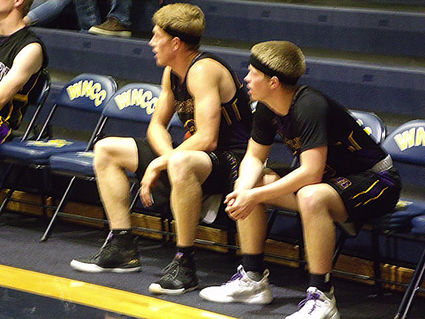 Above left: Hornets players - Tucker Norman and Andrew Fornstrom sit on the sidelines waiting to play.

Tucker Norman and Andrew Fornstrom were selected to play in the Panhandle Prep All-Stars tournament on Saturday, June 1.

They headed to Scottsbluffs with their coach, Tyler Kimzey to compete with players from Wyoming, Nebraska and South Dakota.

The tournament was played with two teams - Red and Blue.

Norman and Fornstrom played for the Blue team, and while they lost the game, it was a close one with a final score of Red 116 vs. Blue 109.

Each game was played with 12 minute quarters instead of the normal 8 minutes. In individual scoring, Norman scored 15 points, and Fornstrom scored 6.