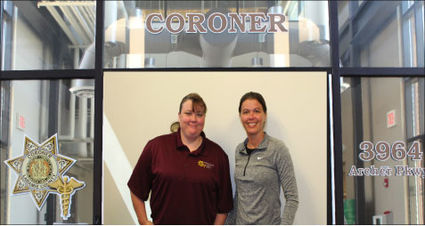 Laramie County Coroner Rebecca Reid and Chief Deputy Coroner Char Madden will work tirelessly for you even though you'll never know that they were there. Both of these women are very dedicated to their jobs, and the county is a better place because of it. People try not to focus on the end of their lives, and no one wants to think about what happens when we die, but with Madden and Reid there, you can be assured that you will be shown the utmost respect and dignity at the end.

Char Madden is a staple here in Pine Bluffs having lived in the area for the past eighteen years. She has spent countless hours working for the Pine Bluffs police department and the sheriffs office, and she still puts in time for the sheriff. Madden has attended a myriad of training to prepare for the job that she does and Reid is grateful to have her experience in her corner. "Char is very passionate with our families. They deserve the utmost respect along with the deceased individuals. We are there to help families in their time of need, and Char has been amazing! " stated Reid.

Along with her amazing attitudes with the families, Madden has had endless training to help her along the way. While with the Pine Bluffs Police Department Madden was able to attend several schools including, but not limited to: cold case/homicide school, blood spatter school, crime scene investigation school, detective/investigative school, and crimes against children school. And the education doesn't stop there. Madden is in the process of obtaining her American Board Certified Death Investigator credentials. No walk in the park, these credentials require 650 hours of on the job training plus a five hour long final exam. To top off all of that, nationally a coroner is required to have fifty hours of training every five years, and Wyoming also requires 20 hours of continuing education every year. So, as time and technology change Madden will be consistently up to date.

No time to sit around, the coroner's office can work anywhere between 800 to 1200 cases per year, and is currently working on 151 open cases now. Unlike what is shown on TV, cases at the coroner's office are not closed within the hour. Time constraints can keep families from getting the answers that they want for months. That is where Madden's excellent attitude comes into play. Madden is in constant contact with the families, often talking with them several times a week. Making sure that frustration stays low, and families feel like they matter is definitely one of Madden's strong suits.

Unlike the medical examiner, which is an appointed position, the coroner is an elected position. While Reid is not overly fond of the political necessity of her job, she is passionate about the work that she does, and that transfers over to her work ethic, and the faith that she has in her employees is well placed. Madden carries that same passion with her to work everyday.

Not one to stay idle, Madden is constantly working. While working at the coroner's office, Madden is also still employed by the Sheriff's Department, and also works as a park ranger for Wyoming State Parks doing mounted patrols. She will be on hand doing just that on the tenth of this month for the grand re-opening of the capitol building. Along with family and church responsibilities, Madden doesn't sit down for too long.

Another impressive show of dignity afforded by this coroner and her office is the American Flag kept on hand to honor those that have served their country. If the coroner's office is called to a scene where the deceased is a former or current military member that person will be taken from the scene draped in the flag. Just one more way that this coroner's office goes the extra mile to show love and respect for their cases.

While you may never meet Madden or Reid, you can be assured that if and when they do see you, you will be treated with respect. They will care for you like you were one of their own, and no matter the circumstances, they will make sure that your family feels cared for, comforted, and informed.